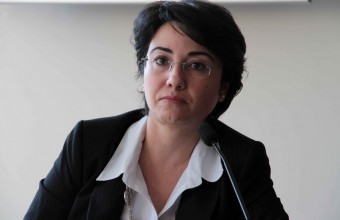 Israeli prosecution has demanded a list of charges be brought against Palestinian Member of the Knesset, Hanin Zoabi, saying that she ‘threatened’ and gave sharp criticism of a Palestinian serving in the Israeli police force.The Israeli Attorney General ordered the opening of an investigation file regarding complaints by the policeman, after Zoabi scolding him during protest against the latest Israeli aggression on Gaza, saying that he stood at the side of the oppressor, according to the PNN.

Zoabi, following investigation, stated that the charges against her were the offspring of racism and Israeli fascism which escalated during the 51-day military operation in Gaza, which killed some 2,200 Palestinians, most of whom were civilians.

Ms. Zoabi added that ‘the people who should be prosecuted are the ministers who incite killing and murder’.

The Kenesset ordered a 6-month deportation for Zoabi, under the pretext of public statements she gave in protest of political issues, sparking anger among Israelis.

Zoabi encountered wide incitement campaigns from Israelis, according to the PNN, especially in the Kenesset sessions, where she stood against zionism.

The Kenesset resumes the debate of the deportation order tomorrow.