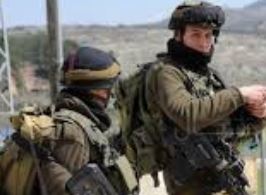 Dozens of Israeli military jeeps invaded, on Saturday at dawn, a number of towns south of the northern West bank city of Jenin, installed roadblocks, and broke into a number of homes and lands before searching them.Media sources in Jenin said the soldiers invaded the towns of Ya’bad and Wadi Da’ouq, stopped and searched dozens of cars and interrogated the residents while inspecting their ID cards.

The soldiers also conducted military searched in the two towns.

Soldiers also invaded Ya’bad town after installing a roadblock on its main entrance, and conducted searched in the al-Malloul neighborhood.

A number of military vehicles also invaded Marka town, and searched a number of farmlands and various groves.

Dozens of soldiers were also deployed in Wadi Da’ouq area, and ambushed several Palestinians in olive orchards; no arrests were reported.