Palestinian Uprising in Wake of Hijazi Assassination and Aqsa Closure, 28 Injured in Jerusalem 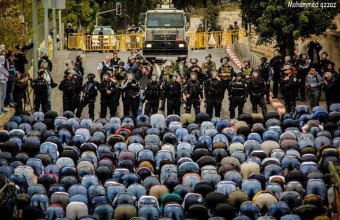 For the first time since 1967, Israel closed down al-Aqsa Mosque compound, following the assassination of a number of Palestinians. PNN reports that, as a result, there has been a civil uprising all across the occupied West Bank and Gaza.Israeli forces blocked worshippers from entering the mosque to pray, as hundreds gathered at the gates of the mosque, finally offering their prayers in the streets.

Violent clashes have been taking place in Wadi Al-Joz and the Thawri neighbourhood, as well as the Qalandiya and Shu’fat areas in occupied East Jerusalem, were young men threw stones and burning bottles.

In Wadi Al-Joz, a ten-year-old boy was injured in the head by a metal bullet, but his injury was reported to be slight.

Forces in Silwan attempted to detain two Palestinian children, a two-year-old and a nine-year old, on suspicion of throwing rocks.

Members of the Jaber family told Ma’an correspondence that once Israeli soldiers had found out the nine-year-old boy’s name (Izz al-Din al-Qassam and also the name of a famous Palestinian national hero and used by Hamas as the name for its military brigades) they began questioning him.

Israeli soldiers apparently attempted to detain the nine-year-old boy based on the fact that he had ‘colored rocks’ in his pockets, presumably to throw at soldiers but, when searched, the child was in fact found to be carrying nothing but candy.

According to a 2013 report by the UN’s Children’s Fund, Israel is the only country in the world where children are systematically tried in military courts and subjected to ‘cruel, inhuman and degrading treatment or punishment.’

Over the past ten years, Israeli forces have arrested, interrogated, and prosecuted some 7,000 children between 12 and 17, mostly boys, and at a rate of ‘an average of two children each day,’ according to UNICEF.

The most violent of Friday’s clashes reportedly took place at Qalandiya checkpoint, where Palestinian youth burned a military tower, while Israeli forces again responded with intensive teargas and metal bullets.

In the Gaza Strip, a huge demonstration was launched following Friday prayers, in solidarity with Jerusalem.

Read more, with additional photos, at the Palestinian News Network.

At least 28 Palestinians were injured during clashes with Israeli forces which continued into the late hours of the night, on Friday, across Jerusalem.

Activist Jihad Oweida told Ma’an that one mourner, Attiya Shabbaneh, was injured by shrapnel from stun grenades in his face, and was subsequently taken to al-Maqasid Hospital for treatment.

Many suffered from excessive tear-gas inhalation while one received a fracture in his foot. A Palestinian youth identified as Rami Salah was detained by Israeli forces.

An official from Red Crescent said that 28 Palestinians suffered from light injuries, while three were taken to hospitals after they were hit at close range with rubber-coated steel bullets in the head, legs, and stomach.

AFP reports that a rocket was also said to have been fired from Gaza, hitting an open area in southern Israel on Friday, according to the Israeli army. No casualties or damages were reported. It is the first rocket from Gaza to be reported since September 16.

Al-Aqsa reopened on Friday, with hundreds of additional police deployed in the area, preventing entry for Muslim men under 50.