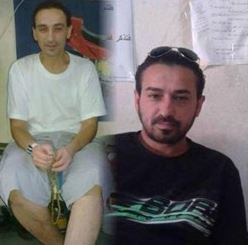 Lawyer of the Palestinian Detainees’ Committee, Karim Ajwa, managed to visit hunger striking Palestinian detainee Ra’ed Mousa, who started his hunger strike 46 days ago, and is currently held at the Barzelai Israeli medical center. Ajwa said Mousa was moved to Barzelai a week ago following a sharp deterioration in his health condition, especially after a serious loss in his body weight, as he stopped the intake of water, sugar, salt and even vitamins, and is only drinking water.

Mousa is currently suffering from a sharp pain in his abdomen, continuously dizzy, lost sensation in his legs, and throws up 4-5 times a day.

The layer said Mousa is cuffed and shackled to his hospital bed every day from six in the morning until six in the evening, and is even cuffed when he needs to use the toilet.

Issa Qaraqe’, head of the Detainees Committee, warned that the detainee is facing life-threatening health conditions, and said that Israel must release him instantly as he is being held under arbitrary Administrative Detention orders, without charges or trial.

Mousa, 35 years of age, is from Sielet ath-Thaher, near Jenin; he spent a total of seven and a half years in Israeli orisons.

The detainee received three consecutive Administrative Detention orders since his abduction on November 29, 2013.

He held a hunger strike earlier this year, and ended it in June after the Prison Administration promised to release him.

Israel is holding captive 550 Palestinians under Administrative Detention orders, while around 7000 Palestinians are currently imprisoned, and facing ongoing violations. 30 of them have been imprisoned since before the First Oslo Agreement of 1993.