Army Kidnaps Two Palestinians In Hebron, One In Bethlehem 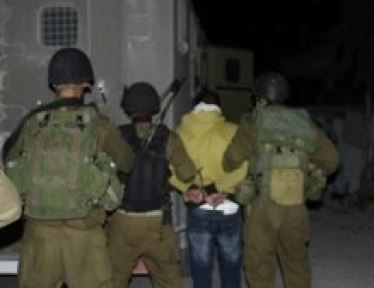 Israeli soldiers kidnapped, on Tuesday at dawn, two Palestinians in Beit Ummar town, north of the southern West Bank city of Hebron, and handed a third a military order for interrogation. Army also invaded the al-Khader town, south of Bethlehem, and kidnapped one Palestinian.Spokesperson of the Popular Committee Against the Wall and Settlements in Beit Ummar Mohammad Awad said several military vehicles invaded Beit Ummar before the soldiers broke into and searched several homes, and kidnapped two Palestinians.

The two have been identified as Nadim Samir Ekhlayyel, 22, and Mohammad Khalil Sabarna, 19; both are former political prisoners.

Soldiers also handed Ahmad Mohammad ‘Ayyad, 17, a military warrant ordering him to head to the Gush Etzion base for interrogation.

Several armored jeeps also invaded a number of neighborhoods in Hebron city, while the soldiers installed roadblocks at the entrance of Sa’ir town, north of Hebron, Halhoul Bridge, in addition to Yatta town, south of the city.

The soldiers stopped and searched dozens of cars and searched them while inspecting the ID cards of the passengers.

In Bethlehem, soldiers invaded the al-Khader town, south of the city, kidnapped one Palestinian and handed another military order for interrogation.

Local sources said the soldiers kidnapped Bara’ Ibrahim Abu Ghalioun, 29, from his home in the Hebron-Bethlehem road area, and took him to an unknown destination.

In addition, soldiers installed a roadblock at the main entrance of Beit Fajjar town, south of Bethlehem, and handed resident Abdul-Hafeth Abu Sham’a, from the al-‘Arroub refugee camp, north of Hebron, a military order for interrogation at the Etzion base.

Abu Sham’a was driving his car when the soldiers stopped him at the entrance of Beit Fajjar.