EU: Jerusalem should be capital for two states; peace talks must resume 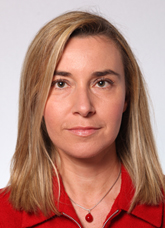 The top European Union diplomat, Federica Mogherini, on Saturday called for Jerusalem to be shared between Israel and Palestine, as unrest in the holy city threatens a major escalation.In her statement, Mogherini said ,’I think Jerusalem can be and should be the capital of two states. Jerusalem is not just a beautiful city, the challenge is to show that Jerusalem can be shared in peace and respect. The message is not for the people who live here, the message is to the rest of the world. It is not a Palestinian-Israeli situation, it is a global issue.’

Mogherini gave this statement at a joint press conference with Palestinian Prime Minister (for the West Bank) Rami Hamdallah, in which Hamdallah criticized the Israeli police for shooting and killing a Palestinian citizen of Israel during a protest in northern Israel on Friday night.

In a separate press conference with Israeli Foreign Minister Avigdor Lieberman, Mogherini stated, “The risk is that if we do not move forward on the political track, we will go back… again to violence. That’s why I see the urgency in moving forward [toward renewed peace talks]. We are willing to work not only to renew the negotiations but also to assure that they will bring on a two-state solution. On this track, new settlements are an obstacle.”

Lieberman is known for his extreme-right views, having in the past called for the expulsion of all Palestinians from what is now Israel (formerly Palestine), and the execution of Palestinians who refuse to declare loyalty to the Jewish state.

Violence has escalated in Jerusalem in the last two weeks following the invasion of Islam’s third-holiest site, the al-Aqsa mosque, by right-wing Israeli settlers who have repeatedly declared their intent to destroy the mosque and replace it with a Jewish temple.

The Israeli government, instead of preventing the settlers from invading the mosque, has sent in soldiers to accompany them, and has violently assaulted Palestinian protesters upset about the invasion of the Muslim holy site. Israel controls access to the mosque, and has had soldiers stationed outside since 1967 – this has long been a point of contention for Palestinians.

Last week the tension hit a peak when a Palestinian man allegedly attempted to assassinate a right-wing Israeli settler, Yehuda Glick, who has been leading the charge to take over the mosque, landing the settlement leader in the hospital. In response, Israeli forces attacked the home of the alleged Palestinian perpetrator, cornering him on the roof of his home and killing him, tearing his body apart with dozens of rounds of bullets. Israeli officials announced Friday that they plan to demolish his family’s home as punishment for the alleged crime.

In addition, Israeli officials have closed the al-Aqsa mosque for the first time in decades, and have invaded the mosque to attack any worshipers who dared to defy the ban.

In response to Mogherini’s statement, Israeli Prime Minister Binyamin Netanyahu stated, “I reject the baseless claim that the root of the conflict is some settlement or the other. The issue is not about territory, but rather our very existence and the refusal to recognize Israel, within any border. Jerusalem is our capital, not a settlement. Jewish neighborhoods, where we are building have been standing for almost fifty years.’

Since the creation of Israel in 1948, the government of Israel has refused to acknowledge where the country’s borders are. Instead, Israel has continually encroached onto Palestinian land, expanding the territory of the state over 87% of historic Palestine, leaving Palestinians squeezed in to just 13% of their original land.

Palestinian-Israeli member of the Israeli Knesset (Parliament) Ahmed Tibi, for his part, stated, “Netanyahu continues to build settlements, including in Jerusalem. The continued construction and expropriation of land impedes any possibility of a two-state solution”.

Israel took over control of the city of Jerusalem in 1967, but the final status of the city has remained elusive – with both Palestinians and Israelis claiming the city as their capital. When Israel was created on the land of historic Palestine in 1948, the UN resolution calling for its creation established Jerusalem as an ‘international city’, which would be open to all and would not be under Palestinian or Israeli control.

But that never happened, and since Israel’s military takeover of the city four decades ago, the Israeli government has worked to systematically destroy and depopulate Palestinian neighborhoods in the city and to replace them with Israeli housing developments.