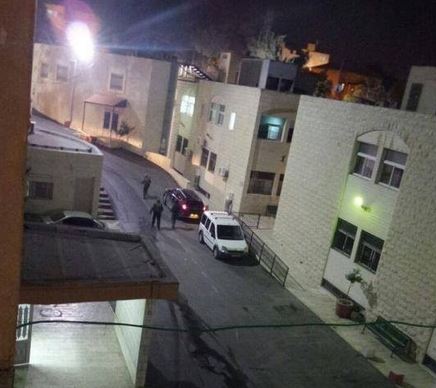 Dozens of Israeli soldiers invaded, on Saturday evening, the al-Makassed Hospital in the at-Tour town, in occupied East Jerusalem, and kidnapped one Palestinian after assaulting him. Soldiers also kidnapped three Palestinians, including a child, in Jerusalem.Eyewitnesses said the soldiers searched the hospital and its yards, before invading the Urgent Care Unit, and kidnapped a young man after beating him.

Hospital Administration said the soldiers fired dozens of gas bombs into the hospital, over the last two days, and even sprayed it with waste-water mixed with chemicals.

It denounced the ongoing assaults, and said invading hospitals is an act that violates International Humanitarian Law, and called on the Red Cross and representatives of western countries to intervene and stop the escalating Israeli violations.

The soldiers also fired dozens of gas bombs into the streets of at-Tour, and even into a number of stores and homes, and kidnapped a child identified as Omar Abu al-Hawa, 14.

Clashes also continued in the Shuâ??fat refugee camp, Jabal al-Mokabber, and various Palestinian neighborhoods and towns in occupied East Jerusalem while local youths managed to burn a military watchtower at the near the camp.

In other news, Israeli sources said three settlers were injured when Palestinian protesters hurled stones at their car, near the northern West Bank city of Nablus.