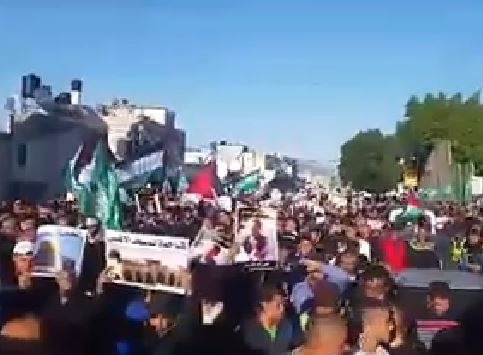 Thousands of Palestinians participated in the funeral ceremony and procession of Kheir Ed-Deen Hamadan, who was shot and killed, on Friday at night, by Israeli police fire in Kafr Kanna village, in the Galilee.Undercover police officers shot Hamdan as he tried to stop them from arresting one of his relatives.

Dozens of Arab officials, including Members of Knesset, religious figures, local leaders and social figures participated in the funeral, while the hundreds of police were deployed in the village after closing roads leading to it.

The Follow-Up Committee against Violence issued a statement calling describing the shooting as a ‘cold-blooded crime’ carried out by the police.

It said the officers chose to shoot Hamdan dead instead of arresting him executed Hamdan.

The Committee added that what happened is an â??execution without trial,â? and that it indicated a green light from Israeli government institutions allowing murdering the Arabs and Palestinians.

Lawyer Talab Saneâ??, head of the Follow-up Committee against Violence, said the general strike, declared in the village and various Arab towns, will not bring Hamdan back to life, but will likely prevent the upcoming crime.

He added that Israelâ??s crimes and violations must be exposed, and the perpetrators must be brought to justice.

Saneâ?? said the Police Chief must be fired, as he made various racist statements against the Arabs, â??granting a green light to the police to conduct crimes, and act like a mob when dealing with Arabs and Palestinians in the country.â?