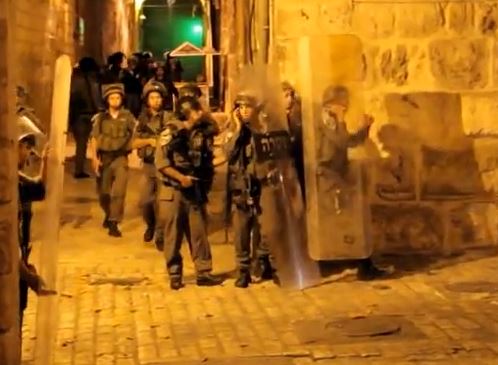 Several vehicles also invaded Silwan town, south of the al-Aqsa Mosque, broke into and ransacked a number of homes and shops, and kidnapped a Palestinian identified as Sofian Gheith, 22.

The army said the soldiers are searching for fireworks used against the soldiers during protests in the occupied city.

In addition, the soldiers invaded various neighborhoods and alleys in the Old City, and kidnapped two Palestinians identified as Hamza al-Joulani, 31, and Bilal al-Joulani, 20.

Shortly after midnight, soldiers invaded the Shuâ??fat neighborhood, in heart of Jerusalem city, and kidnapped four children and two adults.

Two of the kidnapped have been identified as Fares Awadallah and Ahmad Yousef Abu Khdeir.