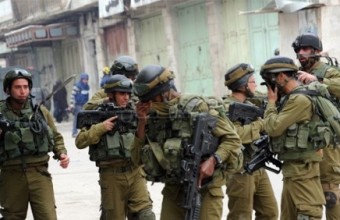 A number of Palestinians suffocated by teargas on Wednesday during confrontations with the Israeli army, while live Israeli fire in Ramallah has left Palestinian youngster Ahmed Hassouna in critical condition. Electronic gates to be installed at al-Aqsa Mosque.Clashes in Nablus erupted in the village of el-Lebban e-Sharkiya, to the south of Nablus, according to head of the village council Abdul-Hadi Oweis, who said that confrontations erupted after Israeli soldiers intercepted some students who were on their way home from school, spurring clashes with residents.

He said that the soldiers fired teargas canisters and stun grenades, causing many locals to suffocate, according to WAFA.

Also on Wednesday, PNN reports that Israeli forces shot young Ahmed Hassouna with three bullets, and arrested Samer Awwad after they broke into a residential building in Beitunya, West Ramallah, by dawn.

Forces broke into Khudeir residential building and searched apartments, when soldiers directly shot Ahmed with two bullets in his feet, and a third in his loin.

Soldiers also reportedly blocked ambulances from moving Ahmed to the hospital, leaving him to bleed for more than half an hour.

Clashes took place between Israeli forces and dozens of Palestinians in the area, where soldiers fired teargas, sound bombs and metal bullets towards a number of Palestinians armed with stones.

In related news, WAFA correspondence reports that the council of Islamic Waqf and the Supreme Muslim Council (SMC) warned, Wednesday, against Israel’s plans to install electronic gates at the entrances leading to Al-Aqsa Mosque Compound in Jerusalem, as the move is tantamount to imposing full Israeli control over the complex.

Israeli sources claim that the sum of NIS 4 million (about $1 million) was allocated for the plan, which is being implemented clandestinely by Ministry crews, in order not to cause a major upheaval.

Both Councils reportedly slammed the plan as a gross violation of the sanctity of the mosque, a restriction of the freedom of worship and a gross interference in the powers and prerogatives of the Islamic Waqf, which represents the entire Muslim world.