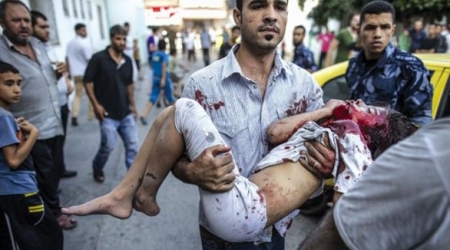 UN Secretary General Ban Ki-moon has announced the formation of an internal panel to investigate specified incidents which happened in the Gaza Strip between July 8th and August 26th , headed by the Dutchman Patrick Kammart.According to Al Ray Palestinian Media Gency, the Permanent Observer Mission of the State of Palestine in the United Nations explained that this panel will investigate the attacks on more than 100 United Nations facilities and, specifically, the UN schools which were most affected.

Also to be investigated is the death of 11 UN staff members during last summer’s offensive.

The Palestinian mission welcomed the decision, expressing its hope that the panel works to serve as the beginning of accountability for all acts and violations committed against Palestinians in Gaza during which over 2,000 people were killed (mostly civilians), including 516 children and 283 women, and some 11,000 injured.

The mission called on panel members to perform their work with high accuracy and transparency, stressing on the full cooperation and commitment from the Palestinian side to facilitate their work.

They also expressed hope that the investigation results must be published as soon as possible, to take the course of justice and accountability and compensate the UN for all damages caused by the Israeli military attacks.