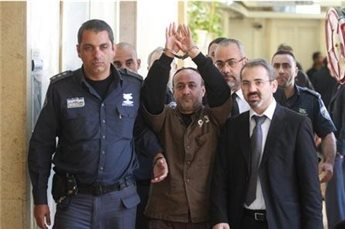 Israeli Prison Service, on Wednesday, reportedly moved jailed Fateh leader Marwan Barghouthi to solitary confinement in Hadareim prison, just a day after he sent out a widely-published letter calling for armed resistance against the Israeli occupation.The Palestinian Prisoners’ Society stated that Barghouthi was being punished for the letter he sent Tuesday, on the 10th anniversary of the death of Palestinian leader Yasser Arafat.

Barghouthi said, in the letter, that ‘choosing global and armed resistance’ was being ‘faithful to Arafat’s legacy, to his ideas, and his principles for which tens of thousands died as martyrs.’

The release of the letter follows months of escalating clashes across the occupied West Bank, East Jerusalem, and Palestinian areas of Israel.

According to Ma’an, Barghouthi is serving five life sentences for alleged involvement in attacks on Israeli targets.

In related news, the Palestinian Islamic Jihad movement, on Wednesday, condemned an attack on a Palestinian village mosque by Jewish settlers earlier in the day, warning that a ‘response’ should be expected.

‘(The one) who encourages the killing of our people, destruction of our possessions, and the burning of our mosques has to expect a response at any moment,’ an official source in the movement was reported to have said in a statement.

The statement came in response to the torching of a mosque in the al-Mughayyir village near Ramallah earlier Wednesday by Israeli settlers.

Attacks such as these, often referred to as ‘price tag’ attacks, often target individual Palestinians’ property as well as Christian and Muslim religious sites, with hundreds of incidents occurring every year.

More than 500,000 Israeli settlers now live in settlements across the West Bank and East Jerusalem, in direct contravention of international law.