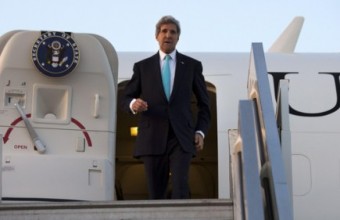 US Secretary of State John Kerry met in Amman, Thursday, with Israeli PM Netanyahu and the King Abdullah II of Jordan, to discuss the rising tension in Jerusalem, while Arab members of the Knesset have declared that price tag gangs are backed by Israeli policy.The meeting at Abdullah’s palace came just hours after talks between Kerry and President Mahmoud Abbas.

‘They will focus on ways to restore calm and de-escalate tensions in Jerusalem,’ State Department deputy spokeswoman Marie Harf said ahead of the talks in the Jordanian capital.

Much of the unrest in Jerusalem, Ma’an reports, has been fueled by Israeli moves to step up illegal settlement activity in the city’s eastern sector and by religious tensions at al-Aqsa compound, a site holy to all three major Abrahamic faiths.

King Abdullah called for Israel ‘to put an end to its unilateral action and repeated attacks against holy sites in Jerusalem, especially those targeting the al-Aqsa mosque compound’, saying there was ‘no alternative to the establishment of an independent Palestinian state’, with East Jerusalem as its capital, in order to achieve peace.

Jordan, which has custodial rights at al-Aqsa, recalled its ambassador to Israel last week, after police clashed with Palestinians inside the mosque compound.

In a letter to the UN Security Council, Palestinian ambassador Riyad Mansour demanded international intervention over al-Aqsa, warning that tensions could ‘spiral out of control’.

In a related context, members of National Democratic Assembly in the Israeli Knesset stated, Wednesday, that price tag gangs are backed by the policy of Israeli prime minister Netanyahu and his ministers.

According to Al Ray Palestinian Media Agency, Jamal Zahalka, Hanin Zoabi and Basel Ghattas said in a press statement that these gangs derive their thoughts and acts from Netanyahu’s strategy, which provides a platform for incitement and racism.

They pointed to Netanyahu as the one responsible for the acts done by right wing mobs against Palestinians properties.

The statement comes following a case of arson at a Palestinian mosque in Ramallah, committed by Israeli settlers on Wednesday. They also painted racist phrases on the walls.

This attack is not the first one, according to the MKs. They stressed that the attacks fit fully in line with Israeli governmental policies which allowed for war crimes to be committed against Palestinians in the Gaza Strip.

‘This attack is not just an attack against a holy place for Palestinian Muslims , but is a grave violation of the Palestinians’ rights and their life. Palestinians have the right to struggle against Israeli racism,’ the statement said.

The members called for the treatment of price tag gangs a terrorist groups, holding the Israeli government the responsibility for crimes that committed by these group since, according to them, the government neither applies the law in dealing with the attacks, nor investigates the crimes.

‘Not prosecuting the criminals encourages them to committee more and more attacks,’ they stated.