Including A Medic, Six Palestinians Injured North Of Jerusalem 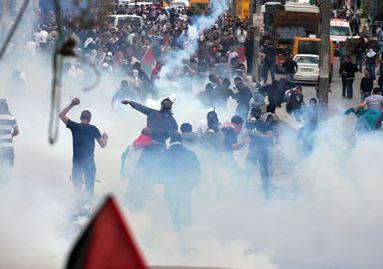 Medical sources have reported that six Palestinians, including a medic, have been injured during, clashes that took place between Palestinian protestors and Israeli soldiers near the Qalandia terminal, north of occupied Jerusalem.The soldiers fired dozens of rounds of live ammunition, gas bombs, and rubber-coated metal bullets, and chased dozens of youths.

Six Palestinians, including a medic, have been injured, and were moved to the Palestine Medical Center in Ramallah City.

Local sources said hundreds protesters in the camp, and marched towards the Qalandia terminal, fired gas bombs and concussion grenades at them, and later fired rubber-coated metal bullets and rounds of live ammunition.

In related news, soldiers kidnapped, on Thursday evening, a young Palestinian man from the northern West Bank city of Jenin, as he was trying to cross the al-Karama Border Terminal on his way to Jordan.

The Palestinian has been identified as Qodwa al-Wahsh, 23 years of age; he was moved to an unidentified interrogation facility.