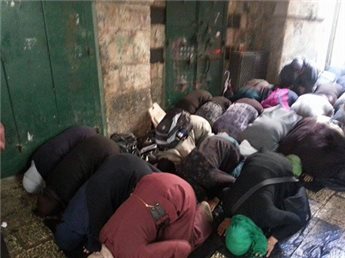 Dozens of Palestinian women were forced to pray in the alley outside of al-Aqsa Mosque, Sunday, after Israeli forces imposed conditions for entry on female worshipers.The renewed restrictions entailed that women leave their identity cards at the Israeli checkpoints that surround the mosque, according to Ma’an News Agency.

Witnesses said that many Palestinian women refused to submit their ID cards, as Israeli authorities frequently confiscate them, and the women knew it could be hours before securing them again, with the possibility of interrogation.

Several women were assaulted with rifle butts at the gates of mosque, witnesses also said.

The invasions, combined with proposals for a Knesset vote to divide the site between Jews and Muslims, have outraged Palestinians, who see the encroachment on the holy site as epitomal to the wider denial of their rights in historic Palestine, including intense discrimination in housing, employment, and social services by Israeli authorities.

Palestinian President Mahmoud Abbas recently described Israel’s reinforced policies against al-Aqsa and its worshippers as tantamount to a declaration of war.

Also in occupied Jerusalem, on Sunday, a Palestinian man reportedly stabbed an Israeli man with a screwdriver, according to Israeli media and police.

The victim was taken to hospital in a moderate condition.