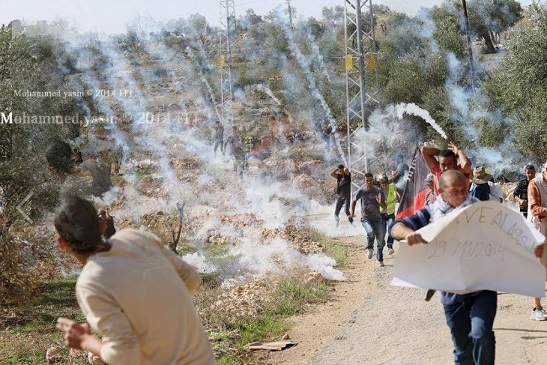 Dozens of Palestinians suffered the effects of tear gas inhalation, during clashes with Israeli soldiers invading the village of Bil’in, near the central West Bank city of Ramallah.Abdullah Abu Rahma, coordinator of the Popular Committee Against the Wall and Settlements in Bil’in, stated that several military vehicles invaded the village, on Monday at dawn, and surrounded the home of the head of the Local Council, Bassel Mansour.

Mansour was not home during the invasion, and the soldiers handed his family a document threatening more invasions and arrests, should the residents continue their protests against the illegal Annexation Wall and settlements, built on the villager’s lands.

On Sunday evening, a number of youths managed to destroy sections of the Wall, and brought the debris to the village.

Bil’in has been leading nonviolent resistance activities against the Wall and settlements, with its weekly nonviolent protests, held by the villagers along with Israeli and international peace activists.

The villagers have been protesting since more than ten years; the army frequently resorts to excessive force, an issue that led to dozens of casualties, including several fatalities.

In 2011, the villagers achieved an Israeli ruling returning to them 1200 Dunams of their farmlands, and are ongoing with their protests against the Wall and settlements that isolated them from their farmlands and orchards.

It is worth mentioning that Abu Rahma, and various figures of the nonviolent resistance movement have been repeatedly kidnapped and imprisoned by Israel.