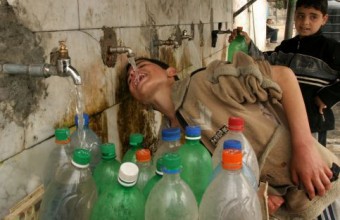 Iyad Salman was terribly shocked to find out that his 9-year-old son, Mohammad, has osteoporosis, an illness that became hugely spread between the children of Gaza.
Iyad assured that he was always keen that his children have a healthy lifestyle.However, his son became ill after buying and drinking desalinated water from carts that sell it in Tal-Sultan neighborhood in Rafah where he lives.

Mohammed’s doctor immediately diagnosed the causative of the illness to be the sold desalinated water, which was reiterated by the head of water monitoring department in the Ministry of Health, saying that the lack of chloride in the water causes osteoporosis, especially for children.

Despite knowing the causes for the illness, there is no substitute for the desalinated water, since the water provided by the Municipality is salted and unfit for drinking, and Israeli occupation control over more than 82% of Palestinian water.

Continue reading at the PNN.