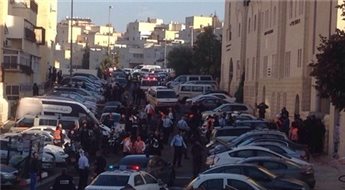 Israeli Prime Minister Binyamin Netanyahu told the media that his military forces would respond ‘with a firm hand’ to an attack by two Palestinians on a yeshiva (Jewish religious institution for study) in Jerusalem in which four religious Jews were killed. Another Israeli government official compared the attack to the Holocaust.

The two men allegedly entered the while prayers were in service with knives, axes and guns, and began attacking worshipers. Israeli police soon arrived on the scene and, after a brief shootout, killed the two men.

Six people were wounded in the attack, including two police officers, according to police spokesperson Luba Samri.

The two men who carried out the attack were identified as Ghassan Abu Jamal and his cousin Odai from Jabal al-Mukabbir neighborhood of Jerusalem.

The institution that was attacked, Kehillet Bnei Torah, is known as a haredi (ultra-Orthodox) institute whose participants are followers of Rabbi Shmuel Auerbach. Auerbach gained infamy in early 2014 throughout Israel when he declared that his followers would “fight to the death” against the Israeli government if the government attempted to enforce the military draft on yeshiva students.

The attack on the religious institution follows months of attacks by right-wing Israeli Jews against Palestinians which went largely uninvestigated by the Israeli police. These include the brutal murder of 16-year old Mohammad Abu Khdeir in June, who was forced to swallow kerosene and then burned alive, according to autopsy reports. The killers were identified and charged, but were released from jail within two weeks of their arrest.

That incident was followed by dozens of others, carried out by Israeli civilians and soldiers throughout the West Bank and East Jerusalem, reaching a peak during the brutal Israeli military assault in July and August in which over 2100 Palestinians were killed, including over 400 children.

Most recently, on Sunday a Palestinian bus driver was hanged to death inside his bus – despite his body being covered with bruises, the Israeli police immediately ruled the death a suicide. Their ruling led to protests by Palestinians, who have no legal recourse in Israeli courts.

After Tuesday’s shooting attack, Israeli Prime Minister blamed both Hamas and Mahmoud Abbas, the Palestinian President – whose Fateh party recently reached a unity agreement with Hamas. The two men involved in the attack did not claim affiliation with any Palestinian faction, but an alleged representative of Hamas praised the attack in Israeli media.

Large numbers of Israeli police were deployed into Palestinian neighborhoods in east Jerusalem following the attack. The police had already been deployed in many of these neighborhoods, where they have had an increased presence over the last several months.

Israeli official Yehuda Meshi Zahav told the Israeli paper Ha’aretz that, “…to see Jews with beards and pe’ot (sidelocks) wrapped in teffilin (phylacteries), surrounded by puddles of blood – I do not remember seeing such a sight. This is not a cliché, it’s the reality. We have only seen things like this happen in the Holocaust.”