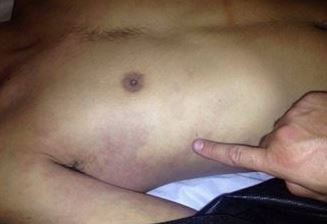 A Palestinian pathologist said the report published by the Israeli police speculating that the Palestinian bus driver, Hasan Yousef Rammouni, hanged himself to death is inconsistent with autopsy findings that indicate he was murdered, and did not commit suicide.Rammouni’s body was found, late Sunday night, in Mt. Scopus in the West Bank, inside a bus he drove, in a bus depot belonging to the Egged Israeli bus company.

Israeli police said he likely committed suicide, but his body carried signs of torture and violence.

Speaking on condition of anonymity, the Palestinian pathologist said Rammouni died by hanging and strangulation, explaining that usually when a person hangs himself to death, the first vertebra would be dislocated, while Rammouni’s body did not show dislocation of the vertebra.

The pathologist also said that the autopsy also showed that rigor mortis, which usually occurs in instances of suicide by hanging, showed that the blood settled on the buttocks and not the lower limbs, which indicates Rammouni was not dangling when he died, the Maan News Agency reported.

Maan also quoted the expert stating that the Palestinian driver was likely killed in a planned attack, and that it would take more than three months of lab work to officially confirm his findings.

Mustasem Faqeeh, a Palestinian driver who worked with Rammouni, said he saw the body of Rammouni hanging from a bar above the steps over the back of the bus, in an area that would have been impossible for him to reach and hang himself alone.

The family said they do not accept the Police report claiming the death was caused by suicide, especially since Rammouni’s body showed bruises and other signs of torture and violence before his death.

The announcement by Israeli police that they deemed the death a suicide came just hours after the body was found, which was not sufficient time for any type of investigation or for an autopsy of the body to determine the cause of death.

Police provided no evidence for their claim that the death was a suicide.