John Kerry Conducted a Theatre of the Absurd in Amman 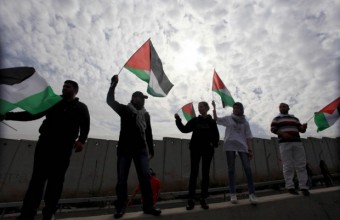 No one takes US ‘peace plan’ efforts seriously anymore – the Amman meetings were proof of that.US Secretary John Kerry met in Amman with King Abdullah, PM Netanyahu, and PA leader Mahmoud Abbas for the umpteenth episode of the ongoing theatre saga dubbed the ‘peace process.’

Just across the river in occupied Palestine, a sadly familiar scene continues to unfold: increased colonial activities; attempts to drive Jerusalemites out of the occupied city and make it into a Jewish on; restrictions on millions of Muslims and Christians from reaching their Holy sites; home demolitions; random and bizarre acts of violence; and 6,000 political prisoners languishing in Israeli gulags/prisons.

Seven million of us Palestinian are refugees or displaced people (out of a population of 12 million). Land left for us to live on in historic Palestine is now a mere 8 percent of our historic land (that includes the cantons left for us in the Galilee, Naqab, Gaza, East Jerusalem, and the West Bank).

Millions of Jewish settlers from Europe and other parts of the world now control 92 percent of the land, more than 90 percent of the water, all border crossings, and all other natural resources in the country. Israel’s latest assault on the besieged people of Gaza this year killed 2,170 and injured 10,900 human beings. About 80 percent of these casualties were civilians, including 519 children who were killed and 2,114 children who were injured.

During that genocidal assault, Kerry had nothing but praise for the colonizers.

Zionism started here in the 19th century as a colonial movement to change a multi-religious flourishing Palestine (3 percent Jewish at the time) into the Jewish state of Israel in the Levant (JSIL).

The support of western powers was and continues to be critical for JSIL’s establishment and (increasingly more expensive) maintenance. Kerry’s intentions were made clear by his statements that were directed toward the goal of supporting JSIL. Not one word was mentioned about Palestinian rights.

The rich, manoeuvring, and conniving politicians can continue their macabre theatre in places like Amman and Washington and Ramallah and Tel Aviv, while millions of destitute people suffer and continue to stew with anger as they try to liberate themselves.

The question remains when will this insanity end and do meetings like those in Amman merely prolong the agony and give cover to ongoing atrocities? Most people here understand that the USA cannot be a peace broker when it continues to fund Israel to the tune of billions of dollars a year, arm it to the teeth, and shield it from international law by using its veto power at the UN against the will of the international community.

The US/Israel-created ‘Palestinian Authority’ (PA) is now dominated by men more concerned for their jobs than the future of Palestine. This was the trap that was created in the negotiations in Norway in 1993 (the Oslo accords). Since then, the number of Israeli colonial settlers in the West Bank alone rose from 180,000 to 650,000. More and more, life for us – the remaining Palestinians – has become unbearable.

Maintaining a racist system has meant creating and pushing an Israeli educational and social system that increasingly forces its population to the extremes – a development that helps to explains mosque torching, random attacks on civilians with impunity, and more.