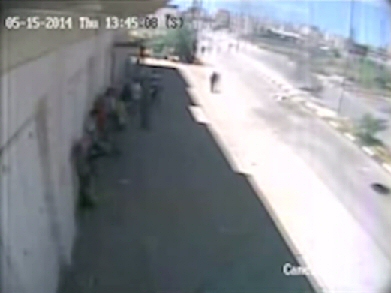 Defense for Children International – Palestine has published a video analysis, conducted by Forensic Architecture, which identifies the Israeli soldier who shot and killed 17-year-old Nadim Nowarah six months ago, in the West Bank city of Beitunia.According to WAFA Palestine News & Info Agency, DCI-Palestine said in a recent press release that “although Israeli authorities initially asserted that no live fire was used by soldiers during the May 15, 2014 protests, one border policeman, whose name has not been released, has since been arrested by Israeli police and faces manslaughter charges.”

DCI-Palestine noted that the arrest was made after it released a video footage from security cameras which captured the fatal shootings of Nowarah and 16-year-old Mohammad Abu Daher, as well as an autopsy’s ruling that a live bullet was the cause of Nowarah’s death.

The rights organization commissioned Forensic Architecture, a research agency which provides spatial and media analysis, to investigate video footage which captured the fatal shootings of Nowarah and Abu Daher. A team of architects, video and audio specialists analyzed the CCTV footage from the four security cameras, along with CNN released footage from the same incident to identify Nowarah’s shooter, “Soldier A”.

Forensic Architecture, WAFA reports, is funded by the European Research Council and hosted by the Center for Research Architecture at Goldsmiths, University of London.

The project consists of multidisciplinary spatial practitioners — architects, artists and filmmakers — who undertake architectural research within the framework of international humanitarian law and human rights. Their investigations have provided evidence for international prosecution teams, political organizations, NGOs and the United Nations.