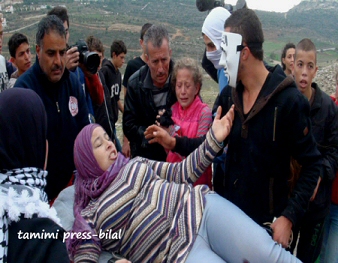 A number of Palestinians across the occupied territories have been targeted with live fire this weekend, with random attacks by civilians becoming increasingly common, in addition to attacks by Israeli soldiers.Israeli forces shot and injured three Palestinians participating in a weekly Friday demonstration in the village of Nabi Saleh, according to a report by the International Solidarity Movement.

Yesterday, at noon, between forty and fifty Palestinians, Israelis, international activists and journalists marched down from the center of Nabi Saleh towards a water spring stolen by a nearby illegal settlement.

In addition to firing rubber-coated steel bullets and tear gas to quell the demonstration, soldiers also began to shoot .22 live ammunition, a weapon which has maimed and killed multiple Palestinians, even as Israel continues to claim it as a “less lethal” way of assaulting demonstrators.

Two seventeen-year-old boys were shot while throwing stones, one in the thigh
and one in both the hand and foot. One Israeli soldier fired at a child under the age of twelve as the boy was running away up the hill beside the road.

Nariman Tamimi, a thirty-eight-year-old woman from the village, was shot in the thigh at close range with a .22 bullet. She was taken away for medical treatment, where she underwent surgery, and currently remains in hospital.

Full story and photos at ISM

Another Palestinian was shot and injured by Israeli forces, on Friday evening, in the northern Gaza Strip.

According to Ma’an News Agency, 22-year-old Ibrahim al-Nimnim was shot in the right foot, in the vicinity of al-Shuhada graveyard, east of Jabaliya.

Ibrahim was shot after he and a group of others approached the border, setting fire to tires and throwing rocks toward the border.

He was said to be in moderate condition after being taken to Kamal Adwan Hospital for treatment.

Ma’an further reports that an Israeli settler, also on Friday evening, opened fire at a vehicle being driven by a Palestinian near the village of Beit Ummar, north of Hebron.

Spokesman for the Popular Resistance Committee in Beit Ummar, Mohammad Ayyad Awad, stated that an Israeli settler driving a white Citroen vehicle heading south towards Hebron opened fire at a taxi driven by a Palestinian as it sat on the side of the road.

The settler’s fire reportedly hit the body of the car, upon which the passengers in the car ran to a nearby gas station as the settler sped away. No injuries were reported.

Awad added that a group of Israeli soldiers were standing a few meters away from the incident but did not react or try to stop the perpetrator.

Two physical assaults on young Palestinians, ages 22 and 20 respectively, by Israeli settlers were also reported: one which occurred near occupied Jerusalem’s Old City, at the Damascus Gate, and another in Wadi al-Maleh, in the northern Jordan Valley.

Two of the settlers were detained, along with a companion of the first victim, but the settlers claimed that the Palestinians had launched the attack.

In the Jordan Valley incident, forces were reported to have simply arrested the victim.

Israeli forces, on Saturday, abducted one Palestinian in Hebron, in addition to summoning six others from Bethlehem to appear for interrogation, according to security sources.

WAFA reports that forces stationed near the Gush Etzion illegal settlement bloc arrested ‘Ali al-Badawi, a resident of al-Aroub refugee camp. He was taken to an unknown destination.

Several Hebron neighborhoods were reported to have been raided, Saturday, as forces set up roadblocks at the entrances of Halhul and Sa‘ir areas, stopping Palestinian-registered vehicles along the roads and examining ID cards.

Israeli forces raided Jabal al-Mawaleh neighborhood, in Bethlehem, as well, where they served ‘Adel Jawarish, 50, and ‘Ali Salahat, 32, with notices to appear before the Israeli intelligence.

See: At Least 380 Palestinians Kidnapped by Israeli Forces in Past 3 Weeks