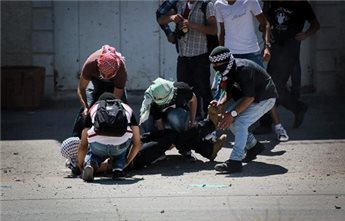 A Jerusalem court has charged an Israeli border policeman with manslaughter for the shooting death of a Palestinian teen, during a demonstration in the occupied West Bank, this past May.17-year-old Nadim Nowarah was killed on May 15, during a day of clashes in Beitunia, to the southwest of Ramallah, between Israeli forces and Palestinian protesters marking the anniversary of the Nakba, or ‘catastrophe,’ when 700,000 Palestinians fled or were driven from their homes by Jewish militias in 1948.

According to AFP, Israeli news site Ynet said it was previously suspected that the policeman would be charged with murder, but that the charge had been reduced to manslaughter.

Nadim’s father reportedly criticized the manslaughter charge, saying that evidence showed that the killing was premeditated.

CNN footage showed a group of five or six border police officers in the area, one of whom could be seen firing at the time when the youth was hit. CCTV footage revealed that the boy was shot unprovoked, during a lull in the clashes.

At the time, Israeli authorities declared that border police were quelling a violent demonstration by about 150 Palestinians, and denied that live fire was employed.

However, autopsy soon confirmed that Nadim died after being hit in the chest with a live bullet.

A second teenager, Muhammad Salameh (Abu Daher), aged 16, was also killed in the same place during the protest, also after being hit in the chest by live fire, but his family refused to allow a post-mortem.

Ben Deri, who was arrested earlier this month by the justice ministry’s internal affairs department, has denied the charge against him.