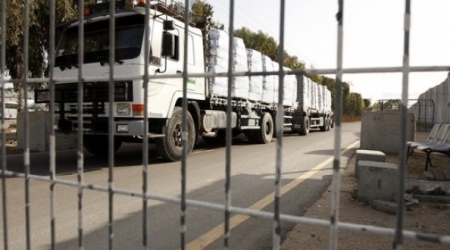 Israeli occupation authorities have barred, at Kerm Abu Salem crossing, ten truckloads of agricultural products from passing out of the war-torn and economically besieged Gaza Strip, due to an alleged dispute between the Israeli army and the Ministry of Agriculture.The dispute is preventing the trucks and their cargo to pass, and to be exported to Saudi Arabia and West Bank, according to Al Ray Palestinian Media Agency.

Israeli website Walla reported, on Monday, that allowing the export of the agricultural products comes in the framework of ‘ facilities’ granted for Gaza residents in the wake of the last summer’s assault on the region, by Israel.

Israeli authorities had previously agreed on the passage of ten truckloads per day.

Walla added that this shipment of vegetables weighs 100 tons, and has been held back since Sunday morning.

According to the Israeli system, after the truckloads pass to the military checkpoint on the Palestinian side of the crossing, they should be inspected and, then, loaded again onto Israeli trucks to pass to their planned route.

The office of the Coordinator of Government Activities in the occupied territories claims that the trucks are still stuck in the crossing because the Israeli Ministry of Health did not yet inspect them in accordance with regularities, with the Ministry itself citing a lack of staff to do that.

At this time, it is not clear when the shipment will pass.