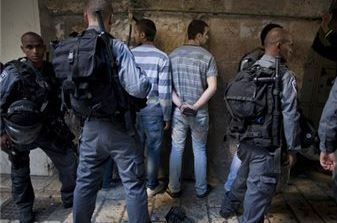 Israeli soldiers kidnapped, on Monday at night, a Palestinian father and his son after breaking into their home, in Jabal al-Mokabber, in occupied East Jerusalem, and searching it. Six more Palestinians, including five children, kidnapped in the Old City.The soldiers alleged they found weapons and ammunition in the home, and arrested the father, 50 years of age, and his son, 20.

Israeli media sources said the police, and Border Guard Units, searched the property, and located a Kalashnikov rifle, a Carl Gustav rifle, a pistol, and magazine.

The father and his son have been moved to an Israeli security facility for interrogation.

On Monday evening, soldiers claimed a settler was stabbed near the Hebron Gate area of occupied East Jerusalem, and suffered a moderate injury.

The army then conducted military searches in the streets and alleys of the Old City, and nearby areas, and kidnapped six Palestinians, including five children.

The kidnapped have been identified as Husam al-‘Alami, who was kidnapped while leaving the Al-Aqsa Mosque through the Tribes Gate, and five children identified as Rashid ar-Resheq, Badawi Abu ‘Asab, 16, Fadi Salayma, 17, Nasser Shaweesh, 16, and ‘Abboud al-Haddad.