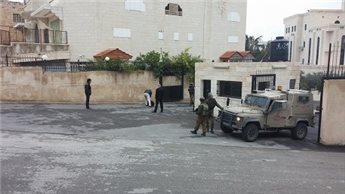 Israeli forces raided, this past Monday morning, the headquarters of the Palestinian Football Association in al-Ram, near Jerusalem. According to Ma’an News Agency, a statement from the PFA said that three Israeli military jeeps raided the headquarters at 9:20 am and apprehended the IDs of several of its employees, prevented them from entering the building, and interrogated them, as well, while also searching the ground floor of the building.

Forces spent 40 minutes searching the building and remained for around 90 minutes, in the vicinity, following.

The statement added that head of the PFA, Susan Shalabi, questioned an officer about the reasoning behind the raid, and informed him that it was an institute related to the Federal International Football Association and should not be raided by an armed group, to which the officer responded that it was not a raid.

Additionally, a number of journalists who were present in the area documented the raid and, before Israeli forces left, they tried to prevent them from taking pictures.