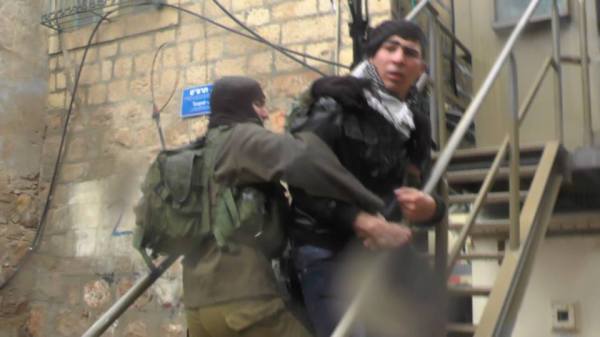 Soldiers accused him of insulting and yelling at them at Shuhada checkpoint. No soldiers claimed that Imad threatened them or behaved violently.

On the way to the checkpoint, ISM activists ran through cold and rain as sheets of water poured down the street. Imad stood exposed, standing just behind a cement barricade on the side of the road leading up the checkpoint. One of the first things he said was, “I’ve been standing here for two hours.”

Shuhada checkpoint has been closed for the past seven days as part of a policy of collective punishment directed at the Palestinians in surrounding neighbourhoods after the checkpoint was burnt during clashes last Friday. The checkpoint connects Bab a-Zawiya, a neighbourhood in H1 (supposedly under full Palestinian authority) to Tel Rumeida, an H2 residential area under full Israeli military and civil control. Israeli soldiers have been for the past several days denying passage through the checkpoint to Palestinians including children, elderly people and teachers from nearby schools who should have special permission to pass.

Video footage from Human Rights Defenders Palestine shows soldiers violently dragging Imad up the stairs of the checkpoint and holding him in a headlock as they push him around.

After about two hours of detention at the checkpoint, Israeli police took Imad to a nearby police station where he was held for approximately an hour before being released to the Palestinian DCO [District Coordination Office].