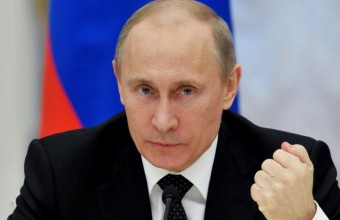 Russian president Vladimir Putin has vowed continued support for Palestinians’ legitimate right to establish an independent, territorial and viable state as soon as possible.’We believe that Palestine’s acquisition of national sovereignty on the common international legal base will be an important factor in ensuring comprehensive, just settlement in the Middle East,’ Putin said in a letter sent to Palestinian President, Mahmoud Abbas, on the occasion of the International Day of Solidarity with the Palestinian People, November 29, 2014.

According to the PNN, the letter was delivered by the Russian ambassador to the state of Palestine, Alexander Rudakov, who handed it over to Secretary-General of the Presidency, al-Tayeb Abdul Rahim, in Ramallah.

‘We are ready within multilateral efforts and in close cooperation with you to continue promoting resumption of the Palestinian-Israeli negotiation process,’ Putin added.

He reportedly concluded by reiterating the friendly relationship between Russia and Palestine:

‘I note with satisfaction the friendly and constructive Russian-Palestinian relations. I am confident that further expansion of the whole complex of mutually beneficial bilateral relations serves the fundamental interests of our peoples. I would like to confirm that the Russian side intends to continue to provide all possible assistance to the Palestinian Authority in the establishment of state institutions and addressing the pressing social and economic problems,’ the Russian president declared, in wishing the Palestinian people health, new success, peace and well-being.

11/29/14 Amid State of Escalating Violence, Abbas Says Palestinians Can No Longer Live with Status Quo