Amid State of Escalating Violence, Abbas Says Palestinians Can No Longer Live with Status Quo 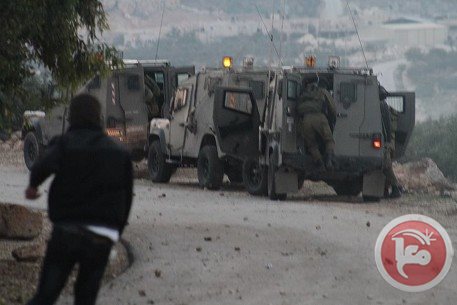 As a recent wave of violence continues to progress in the region, Palestinian President Mahmoud Abbas says that the Palestinian people can no longer live with the status quo in the occupied Palestinian territories.
WAFA Palestinian News & Info Agency reports that, while addressing the Arab foreign ministers in Cairo, Abbas stated Saturday: “We could no longer live with the status quo, particularly since Israel has been stepping up its attacks to impose a fait accompli on the ground,” and further adding, “Israel wants us to be devoid of any real authority and seeks to maintain the occupation of our territory without any cost. Recognizing that the Palestinian state could never be established without the Gaza Strip, it seeks to isolate Gaza from the Palestinian sphere.”

Ceasefire violations are on the increase in the Gaza Strip as Israeli forces again opened live fire on a number of Palestinians in northern Gaza, Friday evening, injuring one.

Spokesman for the Gaza Ministry of Health, Asraf al-Qidra, told Ma’an News Agency that a Palestinian youth in his twenties was hit in his right foot with live fire after Israeli soldiers shot at Palestinians east of Jabaliya, adding that the youth was subsequently brought to the Kamal Adwan Hospital in the northern Gaza Strip, where his injuries were reported as moderate.

An Israeli military spokeswoman said she was not familiar with the incident.

The shooting is the second such attack on Friday, by Israeli soldiers, a day after Israeli forces fired a tank shell into the Gaza Strip, claiming that shots had been fired toward an Israeli military vehicle near the border.

See: 11/28/14 Israeli Forces Open Fire at Gaza Border for further details on the developing situation in the Gaza Strip.

Meanwhile, in Tel Aviv, an Israeli settler was also wounded Friday after being stabbed in by unknown attacker.

PNN reports that, according to Israeli sources, the injured man, aged 47, suffered from moderate wounds and was transferred to Ichilov hospital for treatment. Israeli police have opened an investigation, while the attacker’s identity remains unknown.

Popular demonstrations against the Israeli occupation continue on into the weekend, with clashes occuring between Israeli forces and Palestinians conducting a sit-in, on Saturday, in protest of the closure of a major Hebron street for the past nine days.

Issa Amro, coordinator of a local activist group against Israeli settlements, said that Israeli soldiers fired stun grenades and tear-gas bombs at protesters on Shuhada Street, in the center of Hebron’s Old City.

Dozens suffered from tear-gas inhalation as a result.

Mr. Amro stated that Israeli authorities have been helping Jewish settlers to empty Shuhada Street of its Palestinian residents for the past two decades, and that the closure has directly affected some 250 families still living on the street.

Last night, forces raided the Bethlehem-area village of Tuqu, forcing their way into several homes and firing large amounts of tear gas in clashes which subsequently broke out.

Several Palestinians in Tuqu also suffered from severe tear-gas suffocation and fainting during the clashes, while a Ma’an reporter said that Israeli soldiers fired rubber-coated steel bullets at locals who came out to protest.

Soldiers raided several houses in the village, breaking in the front doors and windows of the homes, and damaging possessions.

Clashes were reported to have erupted on Thursday as well, in Tuqu, at the western entrance of the village.

An Israeli military spokeswoman did not return calls seeking comment.

President Abbas’ remarks on the escalating tension came during the course of an extraordinary meeting held by the Arab Foreign Ministers in Cairo, with the aim of addressing the latest developments regarding the Palestinian question, and to agree on a draft resolution setting a two-year deadline for ending the Israeli occupation and creating the Palestinian state, as well as agreeing on a date to present it to the UN Security Council for vote.

Abbas added, according to WAFA, that he had asked US Secretary of State John Kerry to partake in drafting the resolution, to secure a commitment from Israeli PM Benjamin Netanyahu in ceasing settlement construction, and to release the fourth batch of pre-Oslo prisoners in order to resume negotiations.

“If we don’t receive any response from Israel, we will officially submit the draft resolution to the UN Security Council and sign the applications to accede to international organizations and conventions, including the International Criminal Court,” Abbas stated.

Should the UN Security Council rejects the draft resolution, Abbas affirms that he will reconsider relations with Israel through ceasing security coordination and obliging it, as the ‘Occupying Power’, to take responsibility of the situation.

President Abbas noted that Israel has been adopting an apartheid regime, referring to a number of racist Israeli bills passed by the Knesset that discriminate against the Palestinian people.

Expressing his rejection to recognize Israel as a Jewish nation state, Abbas declared: “Late President Yasser Arafat and late Israeli Prime Minister Yitzhak Rabin exchanged official letters of recognition in 1993. So, we will not accept any change to this recognition and if Israel seeks to change its name, it can do that through the UN.”