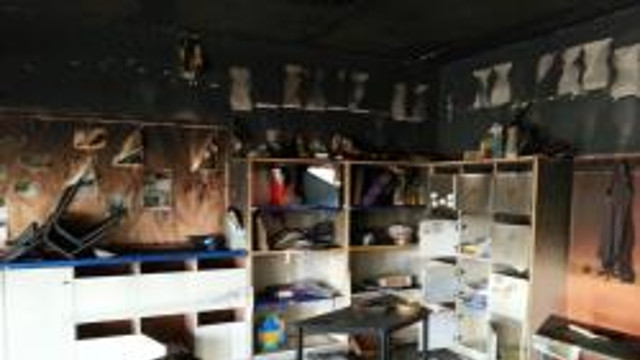 The visits by representatives of the Israeli government who arrived at the vandalised school were a clear display of the regime’s hypocrisy; While they support the state of the Jewish race, they denounce those who implement the conclusions resulting from this.Jewish gangs celebrated the 29th of November by torching and vandalising the bilingual school in Jerusalem, located between Katamon and Beit Safafa. Acts of sabotage and terror by Judeo-Nazi groups whcih dub themselves ‘price tag’ have become commonplace in the school, which supports equality between Jews and Arabs, a concept loathed by supporters of the nation state law.

Price tag gangs are the storm troopers of those who support this racist legislation.

These acts of terror have been conducted undisturbed for years and to date these wild gangs have carried out hundreds of attacks against Palestinians, both residents of the West Bank and citizens of Israel. These terrorists have harmed groves, set fire to mosques and homes, polluted churches and damaged hundreds of cars on both sides of the ceasefire line.

It is most certainly possible that Palestinians killed during these years not by soldiers, found their deaths at the hands of these terrorists, although in cases resulting in death the attackers desisted from leaving an identifying mark.

These gangs do not act in a vacuum. They receive support from parts of the settler population and some of the authorities in security and law enforcement agencies who belong to this same population.

With the rise in the frequency and number of attacks, we have heard demands to declare those conducting ‘price tag’ attacks as members of a terrorist organisation and to treat them accordingly.

The government’s legal advisor, supposedly responsible for preserving the rule of law, recommended that the racist right-wing government not do this. He accepted the prime minister’s contention, which went something like this: their definition as a terrorist organisation “will be a mistake liable to cause damage to the image of Israel in the international community, will increase its delegitimacy and encourage some in the world to compare between ‘price tag’ actions and acts of the Hamas and Islamic Jihad”.

This conception is a natural expression of the idea of the “Jewish state” which stands in complete contradiction to the idea of a secular, democratic state.

And, so, when Jewish Nazis torch a school which supports equality between Jews and Arabs, they are essentially the messengers of the government promoting the nation state law, which is constructed on the identitical methodology which stood behind the racist laws in Nazi Germany. They prove this with the graffiti they leave behind: “against cancer and co-existence”, “against intermarriage” and “Arabs out”.

The visits by representatives of the Israeli government who arrived at the school were a clear display of the regime’s hypocrisy; while they support the state of the Jewish race, they denounce those who implement the conclusions resulting from this.