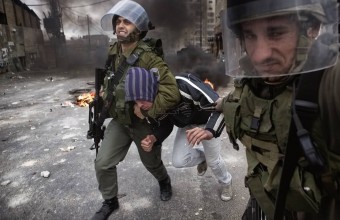 Police said search is underway to locate the whereabouts of the assailant.

In related news, Ynet reports that a 50-year-old Israeli settler was knocked down by a car and critically injured on Monday, to south of Nablus, near the northern West Bank checkpoint known as ‘Zaatara’.

The vehicle fled the scene of the incident, leaving the man critically injured.

An Israeli army spokesman could not confirm the nature of the incident.

A Ma’an reporter said that Israeli forces closed the Huwwara and Zaatara military checkpoints, following the incident, as Israeli forces search for the driver.

Updated from: 12/1/14 Soldiers Kidnap Six Palestinians In The West Bank

WAFA further reports that Israeli police raided Ras al-Amud neighborhood in East Jerusalem, where they arrested three Palestinians from the Najdi family; Sa’ed, Yazan and Rami, after breaking into and ransacking their families’ houses.

Meanwhile, Israeli forces took into custody three Palestinians while they were attending a trial for their arrested relative, Omar al-Abbasi, in Jerusalem District Central Court.

Forces assaulted ‘Ali Ibrahim al-‘Abassi, 25, for attempting to take a photo of his brother Omar during his court session, triggering a scuffle with al-‘Abbasi’s relatives. As a result, ‘Ali al-‘Abbasi, the uncle, 38, and ‘Imad Mhanna, 27, were arrested along with ‘Ali Ibrahim.

Israeli police also raided al-‘Issawiya, to the north of the city, where troops deployed in streets, assaulting and kidnapping 13-year-old Haitham ‘Ibaid.

According to Ahrar Center for Detainees’ Studies and Human Rights, out of 650 people taken from the occupied West Bank, Gaza and Jerusalem in November, 42 were documented as minors, with 30 having been taken from the city of Jerusalem.

Meanwhile, in the Hebron district, forces raided Beit Kahel village to the northwest of the city, where they kidnapped ‘Imad-addin ‘Asafra, after breaking into his house. They also set up a road block at Halhul Bridge, where they stopped vehicles holding Palestinian-registered plates and examined passengers’ ID cards.

In the Nablus district, Israeli Special Forces raided al-Jabal al-Shamali neighborhood in the city, where they nabbed Tamer Sharaf, age 24.

Soldiers stationed near Zaatara checkpoint, to the south of the city, took one Palestinian under the pretext of carrying a knife. The man has not been identified, as of yet.

In Jenin district, forces set up a flying checkpoint near ‘Arraba, where they abducted Nimr al-Damaj, age 23, a resident of Jenin refugee camp.

Furthermore, in the Ramallah district, forces raided Silwad village to the east of the city, where they broke into and ransacked the house of Bassam Hamed, 40, a former prisoner, and detained the family members in one room before re-arresting Bassam. Forces also handed ‘Anwar Hamed a notice to appear before Israeli intelligence for interrogation.

Forces also raided the Ramllah areas of Deir ‘Ammar and Beitillu, where they broke into several houses, occupied their rooftops, and set up a road block at the villages entrances.

No further kidnappings were reported.