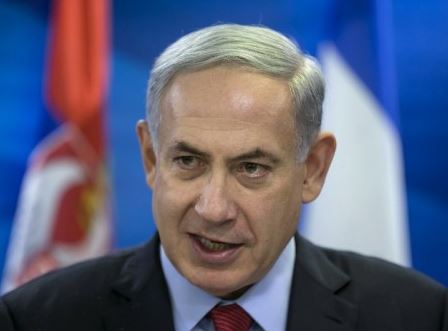 Israeli Prime Minister Benjamin Netanyahu said his current government became incapable of running the country’s affairs, and that he intends to dissolve the Knesset, to arrange new general elections as soon as possible.His statements came in a press conference he held, on Tuesday evening, hours after he fired Finance Minister Yair Lapid, and Justice Minister, Tizipi Livni.

In a Televised speech, Netanyahu said that, under the current conditions, the government became incapable of running state affairs, an issue that affects its efforts to ensure economic growth and security.

He added that the former government was a “real unity government,” and managed to achieve many goals, but this government became unable to perform its duties.

The Israeli Prime Minister said the current government was forced on him, due to the outcome of the elections, adding that his Likud Party could not garner enough Knesset seats to be able to advance its policies, and run the country that way it desires.

He said that his government “has been slammed, and even threatened” by ministers who are part of its own coalition, adding that Livni and Lapid “held hostile stances.”

He said the two ministers defied his own policies, including his stances regarding the “Iranian nuclear file,” in addition to opposing him on main issues, such as his insistent of a Palestinian recognition of Israel as a Jewish State, his settlement construction agenda, and the construction of settlements in occupied Jerusalem.

In addition, Netanyahu claimed Lapid has failed in running the country’s economy, while Livni “violated a decision of the Ministerial Cabinet by holding a meeting with Palestinian President Mahmoud Abbas.”

He also stated Livni defied his and his instructions, and made statements opposing Israel’s ongoing settlement construction activities in occupied Jerusalem.

The Likud leaders added that the government cannot function under the current circumstances, “while some of its ministers are attacking it from within, pushed by owned politics.”

Netanyahu said he would be seeking to dissolve the Knesset, and heading towards general elections in the country as soon as possible.

He also denied reports of an agreement with the Haredi ultra-orthodox right-wing parties, affirmed that his Likud party will be heading for elections on its own, and concluded his speech by stating that “Israel needs a big and strong party to lead it.”