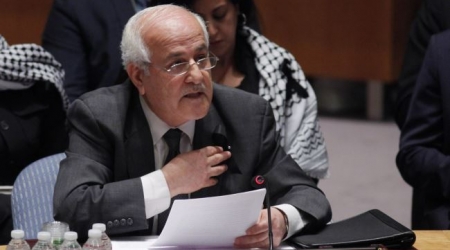 Palestinian envoy to the United Nations, Riyad Mansour, said Monday that the text of the drafted resolution, which is being shepherded by France, is also expected to lay out a timeframe for negotiations on a final peace deal between Israelis and Palestinians.’The French are moving more and more, trying to bring all the European colleagues together, and I think that eventually they will succeed,’ Mansour said, according to Press TV.

The draft resolution, approved by the Arab League in September, calls for ending the Israeli occupation of the Palestinian territories by November of 2016.

Arab League foreign ministers said in a statement that they agreed on a plan which includes submitting an “Arab proposal to the United Nations Security Council to end the [Israeli] occupation” of the Palestinian territories.

Furthermore, according to a recent report by NSNBC, the draft was adopted by the Arab League’s foreign ministers on Saturday and will be formally submitted to the UN Security Council, with the Council scheduled to vote on it within days.

A follow-up committee is reportedly engaged in the process of lobbying for support for the resolution. The committee reportedly includes representatives from Jordan which is currently holding a non-permanent seat at the Security Council.

The Chair of the Arab League, Nabil Al-Arabi told reporters that Jordan will table the draft resolution at the Council within the coming days. In November, Jordan tabled another draft resolution that called for an end of the Israeli occupation of Palestinian territories by November 2016.

It is, however, uncertain whether the new draft resolution will pass. Several U.S. Senators have voiced their strong disapproval of setting a fixed time frame.

The Obama administration, for its part, repeatedly stated that a solution for the “Palestinian Issue” only could be found within the framework of a comprehensive solution for the Middle East. The first time the Obama administration issued such a statement was during the 66th Session of the UN general Assembly, and at the onset of the US/NATO led wars on Libya and Syria.

Many analysts expect that the united States and eventually the UK and France will make use of their veto right at the Security Council.

The Arab league’s draft resolution calls for a Palestinian State within the borders of 1967. Far from all Palestinian political parties agree with a two-state solution, especially when it would imply that the right of return that is guaranteed by international law would be substituted with an economic compensation and “privileges in exile” for the Palestinian families which were displaced since 1948.