Law, not Bombs and Band-Aid – Dr. Mads Gilbert on Palestine 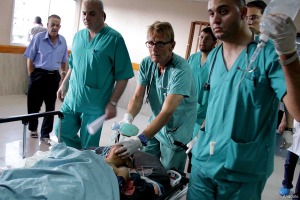 Dr. Mads Gilbert has been providing volunteer medical services for Palestinians for the better part of three decades. In 2014 Israeli authorities informed Dr. Gilbert that he had been banned from entering Israel and the Palestinian Gaza Strip for an unlimited period, that is, for life. The following report reflects a one-hour talk with the Norwegian anesthesiologist whom Israeli authorities denounced as a Dr. Jekyll and Mr. Hyde like character. Dr. Gilbert has indeed undergone a transformation, but not one that would justify the attempted character assassination of the medical doctor who insists that “it’s not about me, Dr. Gilbert, it’s about Palestine and the need to uphold law, instead of bombing first and providing band-aid afterwards”.

Professional Background and a Personal Transformation. Dr. Mads Gilbert is a Norwegian anesthesiologist. Dr. Gilbert is Professor and the Clinical Head of the Clinic for Emergency Medicine at the University Hospital of North Norway in Tromsø. He was born on June 2, 1947 and grew up in the post World War II Norway that had a strong resistance movement against the German occupation during the war. Dr. Mads Gilbert’s first mission abroad was in the, at that time, war-torn Lebanese capital Beirut in 1981 and he returned to Lebanon in 1982, during the time of the Israeli occupation of Lebanon and during the year that the massacre in Sabra and Shatila took place under the eyes of the then Israeli Defense Minister Ariel Sharon. For the last fifteen years, said Dr. Gilbert, he has provided medical services for Palestinians in the Gaza Strip.

Dr. Gilbert noted that his first impression of Israel and Palestine was imprinted into his mind through Norwegian and international media reports at the time of his youth. Dr. Gilbert said:

“As all Norwegians I was brought up with the pro-Israeli narrative about the little courageous country that was trying to bloom, fighting the dirty Arabs. .. We have to repay them our debts after the horrible holocaust which I by the way absolutely support. We have a huge European debt for all the deficiencies which we showed in the time between 1935 and the 40th. .. In the 1967 war I volunteered to work in Israel in a Kibbutz…”

It was within this context that he first heard another narrative, about a Palestine that was under occupation, like Norway was during WW II. Dr. Gilbert withdrew his support for Israel and the Kibbutz and became a member of the Norwegian Palestine Committee.

If one should give any credence to Israeli officials’ defamation of Dr. Gilbert as Dr. Jekyll and Mr. Hyde like character it would be due to the transformation that he experienced when he was confronted with the stark contrast between Israeli and Western media reports and the actualities he could observe.

Invaluable Experiences and Progress in Emergency Medicine. Many media and journalists, especially those who lack insight into the dynamics of emergency medicine and work with conflict-related physical and psychological trauma tend to romanticize or idealize the work that Dr. Gilbert and other health-care professionals provide in Palestine and other conflict zones. The fact of the matter is that there is an exchange of experience and insights between Palestinian health-care workers and medical doctors and volunteers like Dr. Mads Gilbert. Gilbert confirmed that his volunteer work, especially during armed conflicts, enables him to gather unique experiences which, as brutal as it may sound, allow Gilbert to gather unique insights. Experiences which are invaluable with regard to his function as Professor and Head of the Clinic of Emergency Medicine at the University Hospital of North Norway in Tromsø. There are experiences which one cannot learn by studying textbooks, practical experience. Dr. Gilbert agreed that these experiences are of great value when he is teaching young colleagues in Norway and with regard to planning emergency responses, should there ever be mass-casualty events in Norway.

Banned by Israel despite a valid Multiple Entry Visa and a Letter of Invitation from Palestine’s Minister of Health. Asked about how it came to the situation that Israeli authorities, in 2014, banned him from entering the Gaza Strip, Dr. Gilbert said:

“ I was firstly in Gaza for three weeks in June, then I traveled following a request from the UN, from the United Nations Relief and Work Agency (UNRWA), and I did a report on the current health-care situation on Gaza and I also surveyed the civilian public health sector., and I wrote this report which is on the Internet.. (The report is entitled “Brief Report to UNWRA: The Gaza Health Sector as of June 2014”)

“When I traveled in I had a six-months multiple entry visa from the Israeli authorities, from the Israeli Defense Forces (IDF), that is. The visa was valid until November 11th. I left after a little less than three weeks back to Norway to pick up my call on the ambulance helicopter in my department, and two days after I started my call the attack (on Gaza) started, on August the 8th. So, I found a substitute for my call and I went back with my valid entry visa, my Norwegian passport, and a letter of invitation from the Palestinian Minister of Health. I stayed for fifteen days and nights in the Shiffah Hospital, working day and night as an emergency doctor. Then I went back to Norway, and there was no problem getting in and out with that permit.”

Dr. Mads Gilbert would soon try to return to the then devastated Gaza Strip, trying first to enter the Gaza Strip via Egypt and the Rafah border crossing. Dr. Gilbert tried to use the Rafah border crossing with a group of other doctors but the group was at that day denied to cross the border. Dr. Gilbert then took a flight to the Jordanian capital Amman. He later learned that the Egyptian authorities would allow the other doctors to cross the border into the Gaza Strip on the following day, when he already was in Amman. Egypt is currently facing a foreign-backed armed insurgency in the North Sinai province and certain factions of Hamas have been involved in this insurgency, so the Egyptian government enforces tighter restrictions with regards to the crossing of the border than it would like to if it could do so without compromising Egypt’s security.

Dr. Gilbert notes that he had no problems entering Israel via Jordan and to travel to the Eretz border crossing between Israel and the Gaza Strip and there was no problem with getting into the Gaza Strip. He went then back to Norway again to attend to his work at Tromsø, but was invited back to the Gaza Strip to do follow-up work on patients and rehabilitation work at the Gaza Municipality Artificial Limb and Polio Workshop, Gilbert said. Besides that, he added, we had some projects with training as well as with research. About his return for the follow-up work and the projects which Dr. Gilbert was invited to join he said:

“Coming to Eretz (border crossing) on October the 1st I was denied entry. I arrived at Eretz with a letter of the Minister of Health from the coalition government, of course, a letter of recommendation and my valid passport and visa from the IDF. They said ´no you cannot get in, and I asked why, and they said ´we have a security issue with you`. I said ´what is that`,and they said ´we cannot tell you but it is from the security authorities in Israel`”.

Dr. Gilbert said that he called the Norwegian Embassy and the Palestinian Authority who intervened on his behalf but without result. The Israeli authorities maintained that they have “a security issue” with Dr. Gilbert, who said “so I had to leave”. Gilbert said there was nothing he could do so he took the plane home to Norway from Tel Aviv and he wrote the book “Natt I Gaza” (Night in Gaza).

“Actually, I am not traveling there as an activist. I am traveling there on behalf of my university hospital … There are few places in the world where you find more extreme medical disasters than in Gaza, both from an operational point of view. .. How do you organize? Shiffah Hospital had almost 6,000 emergency patients coming in over the time-span of 51 days. That is more than a hundred per day; And they are lacking everything, even power, energy, fuel, disposables, instruments, drugs, and still they maintain their operational capacity under very difficult circumstances. .. Of course, you could say they are traumatized. They are in a way in a double role. They are themselves relatives of people who are getting bombed… still they stand their calls”.

“There is a lot to learn from the way they handle the psychological stress, all the retraumatization of the children… In the end of the day this attack was the fourth attack in eight years and I have been working in Shiffah Hospital during all these four attacks in 2006, 2009, 2012, and now 2014”.

“The numbers speak their own language. Within 51 day they killed, according to the latest UN numbers, 2,131 Palestinians. Among them were 521 children, I repeat, 521 children. 71 Israelis were killed, among them 66 soldiers and 4 civilians, including one child… As I always say, one child killed is one child too many. One civilian on either side is one civilian too many; But it’s this staggering disproportionality that we should really pay attention to because it is against international law to use disproportionate force in a conflict. The Israelis are using an overwhelming disproportionate force against a population which is incarcerated and cannot flee”.

Law, not Bombs and Band-Aid. Discussing statements by the Israeli government that they did everything in their power to avoid casualties with fliers dropped from planes, SMS messages and so forth, before entire residential areas were flattened, Dr. Gilbert replied:

It is noteworthy that Israel also bombed overcrowded UNWRA schools which were used to provide shelter for the population, claiming that these schools had been used to launch rockets or that they had been used for weapons caches. These claims have subsequently been proven to have been disinformation and propaganda. Asked what he would suggest from his perspective as a medical doctor, Dr. Gilbert replied:

“You know, I would be a very bad medical doctor if I focused on cleaning up the blood from the floor without focusing on the injury that causes the bleeding. Donor conferences and aid are of course needed and positive, but it is like cleaning the blood from the floor. What is really needed is to stop the blockade against Gaza and the occupation of Palestine. We need international law to be implemented instead of an endless circle of bombing and band-aid”.

Dr. Christof Lehmann an independent political consultant on conflict and conflict resolution and the founder and editor in chief of nsnbc, exclusively for the online magazine “New Eastern Outlook”.