Child Shot by Israeli soldiers at checkpoint; Soldiers later claimed ‘she had a knife’ 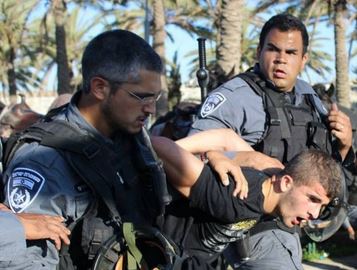 On Thursday evening, Israeli soldiers shot and injured a Palestinian child who was trying to cross the Qalandia terminal, north of occupied Jerusalem, allegedly for carrying a knife and “attempting to stab a soldier.”Eyewitnesses told the Maan News agency that the child, Yathreb Salah Rayyan, 14 years of age, from Beit Duqqu village north of Jerusalem, was at least 30 meters away from the soldiers when they opened fire at her without warning.

They said Rayyan was shot by two live rounds, and that the soldiers also fired several gas bombs. According to Maan, the child was wearing a Borqa (headscarf), and apparently walked into the wrong lane headed toward the checkpoint.

She was walking towards the roadblock using a lane designated for cars, trucks and buses when the soldiers shot her.

The soldiers then prevented the residents from approaching her to offer help, and placed the child in a military jeep before driving towards Jerusalem.

Also in Jerusalem Thursday, soldiers kidnapped a Palestinian, 20 years of age, in the old bus station in Jerusalem, reportedly on suspicion that he took a gun left behind by a security guard in a bathroom stall.

The army claims that the man might have taken the gun, and hid it in a trash bin to retrieve it later; but provided no further information on the issue.

In related news, a young Palestinian man was shot, and injured in the lower part of his body, after Israeli soldiers fired rounds of live ammunition at Palestinians protesting at the main junction of Beit Duqqu village, west of the central West Bank city of Ramallah.

Local sources said the Palestinians were protesting to demand that the army reopen the junction that the soldiers sealed with concrete blocks more than a week ago.