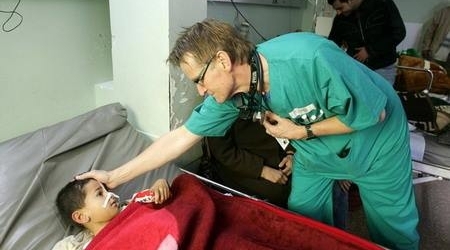 Norwegian doctor, Mads Gilbert, recently denied entrance into the Gaza Strip, says that Israel exercises the siege on the region in an increasingly harsh and brutal way.On a recent edition of the Al Jazzera program, ‘Without Borders’, Gilbert commented on being banned for life from entering Gaza by Israel, saying:

‘This is not about me.
This is about Israel denying the Palestinian people in Gaza international support.’

According to Al Ray, the doctor narrated a number of tragic stories he personally witnessed, while working at Gaza’s al-Shifa Hospital, during the most recent Israeli military aggression.

He explained: ‘The truth on the ground is very inconvenient for Israel. Anyone who conveys that truth is unwanted.
Israel does not want anyone to convey the massacres that it committed, against innocent civilians in Gaza, to the out[side] world.’

Responding to a question about being charged of anti-Semitism by Israel, Dr. Gilbert says that he is anti-racist, and is active in Norway, in the movement against racism, and that Israel must provide a proof that he constitutes a threat to Israel’s security.

On his motivation for travelling to the most dangerous areas in the region, he says that he lives in a rich country, in peace, and enjoys all the pleasures of life, and feels it his duty to share his good fortune with people who are not so lucky.

He warns of the long-term health impacts of the siege, and especially those inflicted on the children. He noted that al-Shifa received more than 6,000 cases during the 51 days of ‘Operation Protective Edge’, this past summer.

Dr. Gilbert adds that he does not think that there is another place in the world where there are people who are trained on crisis and emergency management like the people in Gaza.