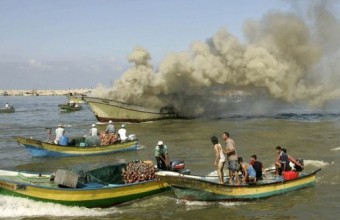 The Palestinian Centre for Human Rights (PCHR) condemned the continued attacks expressed great concern over the repeateded targeting of fishermen and their livelihoods.

All the fishermen were abducted and taken to an unknown destination, their boats and fishing nets confiscated, equipment damaged.

The fishermen were identified as:

· Safwat ‘Abdel Malek Hasan al-Sultan (30) and Sa’ed Ziyad Mahmoud Zayed (32); both from al-Salatin neighborhood, who were on a boat belonging to Fahmi Mahmoud Mohammed Zayed. Israeli forces confiscated their boat and fishing nets.

· Mahmoud Mohammed Mohammed Zayed (29) and his brother Ahmed (30), from al-Salatin neighborhood, who were both on a boat belonging to their father. The boat was confiscated and fishing nets were cut and confiscated.

· Mohammed Amin Rushdi Abu Wardeh (22) and his brother Yousif (19); from al-Salatin neighborhood, who were both on the board of a boat belonging to their father. The boat was confiscated and fishing nets were cut and confiscated.

PCHR condemns the continued Israeli attacks against Palestinian fishermen in the Gaza Strip, and:

1. Calls for immediately stopping the policy of chasing and arresting Palestinian fishermen, and allowing them to sail and fish freely;

2. Calls upon Israeli forces to release the detained fishermen and compensate them for the material damage that might have incurred to them; and

3. Calls upon the international community, including the High Contracting Parties to the Fourth Geneva Convention of 1949 Relative to the Protection of Civilian Persons in Time of War, to immediately intervene to stop the Israeli violations against the Palestinian fishermen and allow them to sail and fish freely in the Gaza Sea.