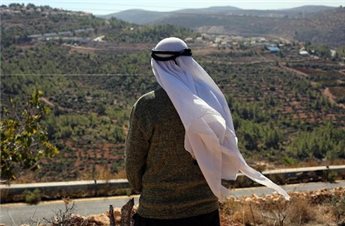 Israeli settlers, on Saturday, attacked Palestinian homes in the Hebron neighborhood of al-Ja‘bari with stones, while Israeli soldiers stood by and watched indifferently, and without taking any actions to stop them, WAFA reports.Hurling stones at the homes, the extremists cursed the owners and shouted anti-Arab racist slogans, including “Death to the Arabs”, spreading panic and fear among Palestinian locals.

Locals called upon human rights organizations to intervene and provide them with protection.

In the Nablus village of Aqraba, on Friday, Israeli settlers again cut down over 50 olive trees.

Over 7,500 olive trees were damaged or destroyed by settlers between January and mid-October in 2012, according to OCHA.

Ma’an News Agency reports that settler violence against Palestinians and their property in the occupied West Bank is systematic, and is ignored by Israeli authorities who rarely intervene in the attacks or prosecute the perpetrators.