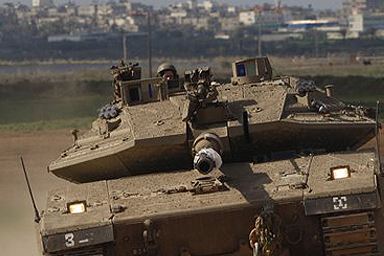 Palestinian sources have reported, Tuesday morning, that an Israeli tank fired a shell into a farmland, east of the al-Boreij refugee camp, in central Gaza.The sources said the shell led to extensive damage; no injuries were reported until the time of this report.

Eyewitnesses said soldiers, stationed near the border fence, fired the shells, adding that the attack was unprovoked, especially since a number of villagers were just working on their lands.

Israeli soldiers frequently attack Palestinian farmers, in areas close to the border fence, and repeatedly deny them access to their lands, in direct violations of the Egyptian-mediated ceasefire agreement on August 26, 2014.