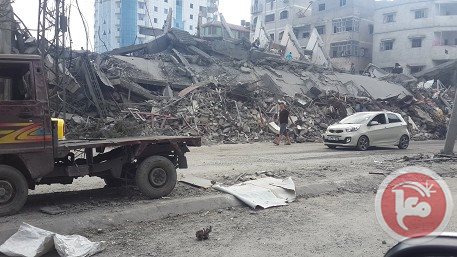 A new report from the international human rights group Amnesty International found that Israeli forces deliberately targeted multi-story apartment buildings in Gaza during the latter part of its invasion this past summer, in actions that amount to war crimes.“All the evidence we have shows this large-scale destruction was carried out deliberately and with no military justification,” said Philip Luther, Director of the Middle East and North Africa Programme at Amnesty International.

“Both the facts on the ground and statements made by Israeli military spokespeople at the time indicate that the attacks were a collective punishment against the people of Gaza and were designed to destroy their already precarious livelihoods.”

The Israeli air strikes on residential apartment towers increased in the last part of the invasion, during August, in the last four days of the invasion.
According to the Amnesty report, while the Israeli military warned the residents of the buildings to leave before they destroyed them, scores of people from nearby buildings were injured and hundreds of people lost their homes, businesses and belongings in the air strikes that leveled the skyscrapers.

In all four cases, panicked residents hurried to evacuate the buildings and in most cases, were unable to salvage their belongings, including important documents, jewelry and savings.

The Municipal Commercial Centre in Rafah, which contained a shopping mall, a garage, several offices and a medical clinic, was reduced to a tangled skeleton of iron girders and concrete. Businesses in this building provided the livelihoods for hundreds of families, who are now struggling to make ends meet.

Other than the suggestion that one of the destroyed buildings housed a Hamas command centre and of “facilities linked to Palestinian militants” in another, the Israeli authorities have provided no information as to why they levelled four entire buildings.

“Even if the Israeli authorities had good reason to believe that a part of a building was being used for military purposes, they had an obligation to choose means and methods of attack that would minimize harm to civilians and their property,” says Philip Luther. “The Israeli army have previously conducted air strikes on specific apartments in high-rise buildings without their complete destruction.”

Amnesty International sent its findings about the air strikes to the Israeli authorities and asked for explanations on why each of the attacks was carried out; what or who was being targeted; what precautions were taken to minimize the risk of harm to civilians; and whether any investigation had taken place or was ongoing.

Amnesty International is calling for the Commission of Inquiry set up the United Nations to be allowed to conduct its investigation without hindrance, and for the Israeli authorities to lift their block on Amnesty International and other human rights organizations entering Gaza.

“War crimes must be independently and impartially investigated and those responsible should be brought to justice in fair trials. Those whose homes and livelihoods have been unlawfully destroyed deserve justice and full reparation,” said Philip Luther.