Palestinian Injured After Being Stabbed By A Settler In Hebron 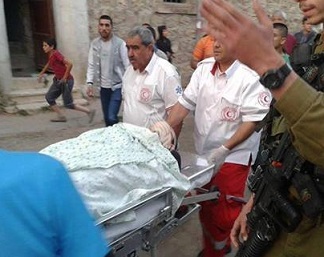 Medical sources have reported that an extremist Israeli settler attacked and stabbed a Palestinian teen, late on Monday evening, near Bani Neim town, east of the southern West Bank city of Hebron.The sources said Moath Noah ar-Rajabi, 18 years of age, was stabbed in his shoulder and thigh, and was moved to the Hebron Governmental Hospital suffering moderate wounds.

The attacker fled the scene; Israeli soldiers arrived at the scene but did not attempt to locate the assailant, eyewitnesses said.

The soldiers also invaded various neighborhoods in Hebron city, and installed roadblocks at the entrance of Doura town.