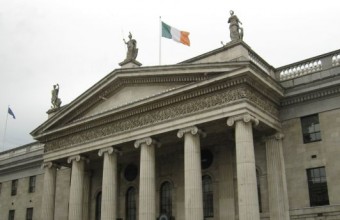 The lower house of the Irish Parliament has approved a nonbinding resolution calling on the government to officially recognize the state of Palestine. The bill was passed late Tuesday night in the Dail, according to PNN correspondence, and was sponsored by Sinn Fein. It calls for a State of Palestine based on the 1967 borders, with currently occupied East Jerusalem as its capital.

‘I’ve no difficulty in principle with the idea of early recognition, if I believe it can contribute to achieving a settlement of the conflict,’ Irish Foreign Minister Charlie Flanagan told lawmakers.

‘The present stalemate is not acceptable.’

Mr. Flanagan referred the credit to Sweden for inspiring the entire 28-nation EU to open talks on November 26th, in Brussels, seeking a possible alliance-wide endorsement of Palestinian statehood.

However, according to Haaretz, he said that Ireland still hoped to make the move as part of a wider Israeli-Palestinian accord — neither before it nor, unilaterally, in advance of achieving EU consensus.

‘Achieving and recognizing a Palestinian state has always been the objective of the Irish government. Everything we do in the Middle East is directed towards that aim,’ Flanagan told a virtually empty parliamentary chamber, with barely a dozen lawmakers present in the 166-seat hall.

Most reportedly represented Sinn Fein, an nationalist party with historical Palestinian links. Palestinian ambassador to Ireland, Ahmad AbdelRazek, watched the debate from the visitors’ gallery above.

‘While successive governments have always seen recognition coming as part of an agreed peace, I’ve made it clear that I’ve absolutely no difficulty in principle with the idea of early recognition, if I believe it can contribute to achieving a settlement of the conflict. The present stalemate is not acceptable to me,’ Flanagan reiterated.

Israel argues that nations which confer full diplomatic legitimacy on the Palestinian Authority discourage their enemies from engaging in direct talks. Sweden became the 135th of the world’s 193 nations to recognize Palestine, but most of the West does not, according to Haaretz.