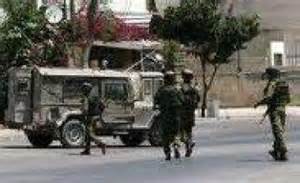 Palestinian medical sources have reported that at 19 residents have been injured, on Thursday evening, while dozens suffered the effects of tear gas inhalation, during clashes that took place in the al-Biereh town, near Ramallah, following the funeral of Minister Ziad Abu Ein.Eyewitnesses said 19 Palestinians were shot by rubber-coated metal bullets fired by the army, while dozens of residents received treatment for the effects of tear gas inhalation in Dahiat Jabal at-Tawil, in al-Biereh.

The clashes took place after the soldiers assaulted several Palestinians following the funeral procession of Palestinian government Minister Ziad Abu Ein, who suffered the effects of tear gas inhalation, in addition to being beaten and chocked to death by an Israeli soldier during a Wednesday nonviolent activity near, planting olive saplings, near Ramallah.

Local youths responded by throwing stones, and empty bottles at the soldiers, forcing them to remain within the settlement’s wall as the soldiers attempted to advance and kidnap some protesters.