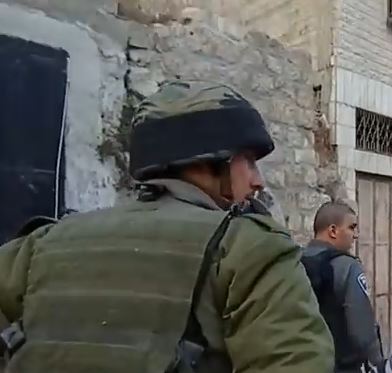 Dozens of Israeli soldiers invaded, on Thursday evening, Beit Ummar town, north of the southern West Bank city of Hebron, broke into and ransacked several homes, and kidnapped two Palestinians. Settlers block an agricultural road near Bethlehem.Mohammad Awad, spokesperson of the Popular Committee against the Wall and Settlements, stated that the soldiers kidnapped Jihad Khalil al-‘Allamy, 19, and Bilal Habes al-‘Allamy, 19, after stopping them at the main entrance of the town.

Awad added that the soldiers broke into, violently searched and ransacked several homes in areas close to the military tower, installed near the main entrance of the town.

In related news, a number of extremist Israeli settlers closed a Palestinian agricultural road leading to farmlands belonging to residents of the al-Khader town, south of the West Bank city of Bethlehem.

Ahmad Salah, coordinator of the Popular Committee against the Wall and Settlements in al-Khader, said the extremists used a bulldozer to place rubble and rocks, blocking the road leading to the ash-Sha’af area, south of the town.