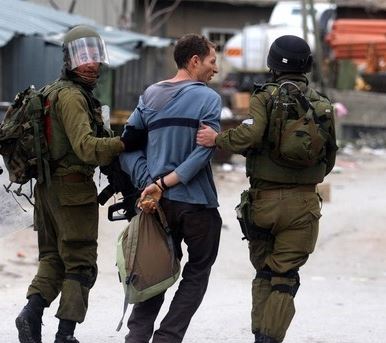 Media sources in Hebron, in the southern part of the occupied West Bank, have reported that dozens of soldiers invaded the city, and nearby communities, shot and wounded one Palestinian, and kidnapped at least five others.The sources said more than seven armored Israeli military vehicles invaded Wadi al-Harya area, before the soldiers fired concussion grenades and gas bombs at a number of homes.

One Palestinian, identified as ‘Omar ‘Amro, was shot and injured, before the soldiers also kidnapped his brother ‘Ammar.

Soldiers also invaded and ransacked a number of homes, near al-Ansar mosque in the Salam Street, and kidnapped Majed al-Haimouni and another member of his family.

Late on Monday at night, soldiers stationed at the Container Roadblock, east of Bethlehem, kidnapped a university student from Doura town.

Local sources said the soldiers stopped and searched dozens of cars before kidnapping Salah Ahmad al-‘Awawda, 20, a student of the Al-Quds University.

On Monday evening, dozens of extremist Israeli settlers marched between the Susiya and Ma’on illegal settlements, built on Palestinians land in Yatta town near Hebron.

Israeli soldiers were heavily deployed in the area, and completely blocked all Palestinian traffic.

Rateb Jabour, coordinator of the Popular Committee Against the Wall and Settlements in Yatta, said the colonists marched on bypass road #60, while chanting racist anti-Arab and anti-Palestinian slogans, including “Death to Arabs.”

Jabour added that the soldiers sealed the entrances of Yatta, and various roads leading to Palestinian villages and communities south of east of Yatta.