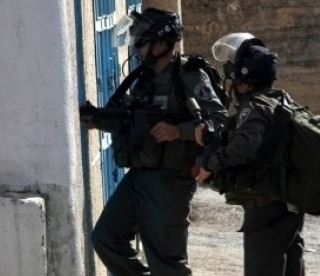 Israeli soldiers kidnapped, on Monday evening, three Palestinians from the town of Teqoua’, east of the West Bank city of Bethlehem, and handed four residents military orders to stop the construction of their homes. Local sources said the soldiers invaded the town, and handed several residents military orders for interrogation in the Etzion military base, south of Bethlehem, and kidnapped three after they headed there.

Late on Monday at night, several Israeli military vehicles invaded Khirbit ed-Deir area, near the Local Council of Teqoua’, and handed four Palestinians orders to stop the construction of their homes.

In Jerusalem, soldiers invaded a Palestinian home in Ras al-‘Amoud in Silwan town, in occupied East Jerusalem, and attacked the a Palestinian family, causing injuries that required hospitalization.

The family members have been identified as Khaled Syouri, his wife Haya, their children Khaled and Raed. They were moved to the al-Makassed Hospital in Jerusalem’s Mount of Olives.

On Tuesday at dawn, Israeli soldiers invaded the Qalandia refugee camp, in the central West Bank district of Ramallah, shot and killed a young Palestinian man with a live round to the head. http://www.imemc.org/article/70021