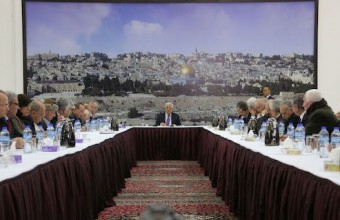 Fellow Arab League member Jordan will present the draft to the UN Security Council, said envoy Riyad Mansour, adding that he would not press for an immediate vote on the text of the draft, in order to allow the opportunity for further discussion on the matter.

The move will open the door for possible US engagement on the initiative.

‘We will continue negotiating with all of them and with the Americans if they are ready and willing so that we, perhaps, can succeed in having something adopted by the security council to open a serious door to peace,’ the envoy said.

The draft calls for a ‘just, lasting and comprehensive peace solution that brings an end to the Israeli occupation’ and ‘fulfills the vision’ of a Palestinian state with Jerusalem as its shared capital.

However, US administration does not approve of any attempt to set a deadline for Israeli withdrawal from the occupied West Bank.

US Secretary of State John Kerry told reporters: ‘We don’t have any problem with them filing some resolution, providing it’s done in the spirit of working with people to see how we could proceed forward in a thoughtful way that solves the problem, doesn’t make it worse.’

According to the PNN, US administration, which has repeatedly vetoed Security Council resolutions which might undermine the authority of the Israeli state, declined to comment on whether or not it would actually veto the Palestinian draft, as was previously reported, arguing that it had yet to examine the text.