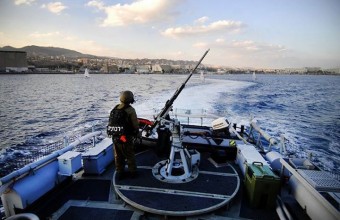 The Israeli navy, on Saturday, again opened fire at Palestinian fishermen boats, this time along the As-Sudaneyya shore, northwest of the Gaza Strip. Hamas has denied responsibility for an alleged rocket attack coming from Gaza, denouncing the recently renewed Israeli airstrikes as foolish.Local sources reported, according to the PNN, that the shots targeted small fishing boats sailing in the area. No casualties were reported.

Attacks on Palestinian fishermen have been continuous since the August 26 ceasefire agreement between Israel and Hamas, though, according to the agreement, Gaza’s allotted fishing zone was supposed to expand, incrementally.

When the siege on Gaza was first imposed, in 2006, fishermen were limited to only three nautical miles off the Gaza shore.

As part of an earlier ceasefire agreement, in November of 2012, Israel agreed to expand the area to six nautical miles, but unilaterally decreased is again to three miles.

Fishermen and their boats, however, remained under constant threat, even within those three miles, leading to dozens of casualties and excessive property damage. Dozens of Palestinian fishermen, in addition, have been kidnapped by soldiers.

The daily illegal Israeli assaults on the Gaza Sea violate the economic and social rights of the Palestinian fishermen who are only allowed a limited area to fish and sustain a livelihood within.

The Hamas party, on Saturday, denounced the recent Israeli airstrikes against a military base in Gaza as a ‘dangerous escalation’, as political parties across Palestine condemned the first bombing since the August ceasefire.

According to Ma’an News Agency, Hamas spokesman Sami Abu Zuhri warned Palestinians of another ‘foolish’ Israeli act, calling upon the international community to carry out its responsibilities toward the renewed Israeli aggression.

The Israeli military said that launched the attack in retaliation for a rocket fired from Gaza just the day before, but Hamas has denied any responsibility for the alleged attack.
Israel, however, has said that it holds Hamas responsible for any rocket fired by any group inside Gaza.

Palestinian political organizations have widely denounced the bombing, condemning Israel for its repeated violations of the recent ceasefire which halted this past summer’s devastating conflict.