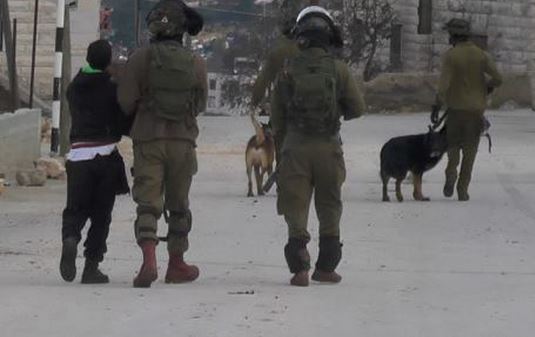 The two have been identified as Taher Jamal Kamil, 24, and Abdul-Rahman Abu ar-Rob, 19 years of age.

Many Israeli military vehicles also invaded Jenin city, before the soldiers stormed a residential apartment building in Jabal Abu Thoheir area, violently searched the home of Riyadh Hasan ‘Arqawi, and handed his nephew Mohammad ‘Arqawi a warrant for interrogation in the Salem military base.

The soldiers also invaded the home of Ashraf Jamal ‘Azamta, 30, and handed an interrogation order to his family as he was not home during the invasion.

Local sources said the soldiers also broke into, and violently searched, the homes of the late Mohammad Hasan ‘Arqawi (who had been killed by the army), the homes of his sons Ghaleb, Fares, Borhan, and Jihad, and handed Mohammad and Borhan Ghaleb ‘Arqawi military warrants for interrogation.

In addition, soldiers invaded the al-Yamoun nearby town, searched and ransacked several homes, and installed a roadblock near Ya’bad town, south of Jenin.

Local sources said the soldiers stopped dozens of vehicles, in both directions, for more than an hour, preventing the residents from entering or leaving the town.

Furthermore, several schoolchildren, and adults, suffered the effects of tear gas inhalation after the soldiers fired gas bombs at them, near the Abu ar-Reesh roadblock, in the Old City of Hebron.

The army said the farm is close to the Annexation Wall, illegally built by Israel in the occupied West Bank turning many communities into isolated cantons, and leading to the isolation of thousands of Dunams of orchards and farmlands.