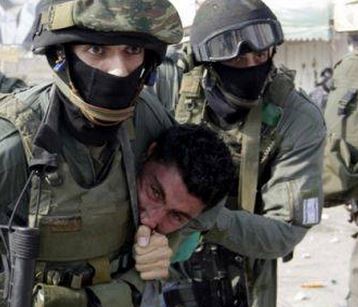 Several Israeli military vehicles invaded, on Tuesday at dawn, the town of Sinjel, north of the central West bank city of Ramallah and kidnapped ten Palestinians after breaking into their homes.Head of the Sinjel Local Council Ayyoub Sweid said a large military force invaded the town, broke into and ransacked dozens of homes, and detained dozens of young men.

Sweid added that the soldiers broke into a wedding hall in the town, after detonating its main door, rounded up all detained young men there, and interrogated them before kidnapping ten, and took them to an unknown destination.

In related news, scores of Palestinians, mainly schoolchildren, suffered the effects of tear gas inhalation near the Abu ar-Reesh roadblock, in the Old City of Hebron, in the southern part of the occupied West Bank.

The Palestinian News & Info Agency (WAFA) has reported that clashes took place, on Tuesday morning, between local youths and Israeli soldiers near the Tareq Junction, in Hebron, after the army invaded it.